Arctic Council has boosted cooperation in the Arctic: survey

But international body also has major limitations, which must be addressed 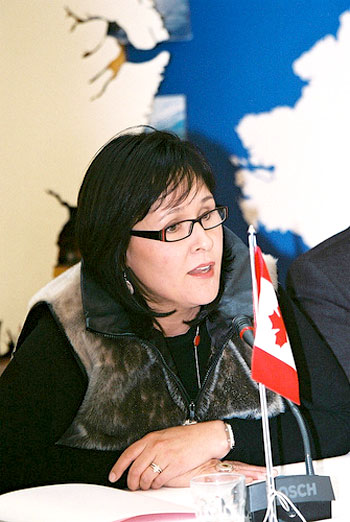 Nunavut MP Leona Aglukkaq speaks to the May 2011 meeting of the Arctic Council in Nuuk, Greenland. The results of a new survey on the effectiveness of the council shows the organization has made a definite impact on how the world views the Arctic. (PHOTO COURTESY OF ARCTIC COUNCIL)

The results of a new survey on the effectiveness of the Arctic Council shows the organization has made a definite impact on how the world views the Arctic.

But the survey also found the intergovernmental body of Arctic states still has a way to go before realizing its full potential.

Two researchers from the University of Lapland in Finland prepared 21 questions and circulated them last winter to individuals and groups who have been active in the Arctic Council’s affairs.

In The effectiveness of the Arctic Council, released this month, researchers Paula Kankaanpaa and Oran R. Young found that the vast majority of respondents (84 per cent) believe the Arctic Council has had a clear impact.

Respondents gave the council a grade of 3.36 out of five, where five equaled “considerable impact.”

In their view, the council is especially effective in increasing international cooperation in the Arctic and raising general awareness about the regions.

Respondents also said they felt the 16-year-old council has had an impact on the ability of the Arctic’s indigenous people to influence local, regional and international polices.

The eight-member state council is credited with moderate success in promoting environmental protection of the Arctic, while respondents’ views were less favourable of the council’s impact on sustainable development.

Of the council’s most effective products, respondents named the scientific assessments prepared by the council.

More than half of respondents named the Arctic Climate Impact Assessment as the council’s most important publication.

But other publications such as environmental guidelines, codes of conduct and technical reports were found to have only “some impact.”

The survey also gave respondents a chance to identify the council’s biggest limitations, which participants cited as a lack of reliable funding to cover the council’s operating costs.

And the main suggestion to alleviate that problem: have Arctic states invest more in national participation in council activities, survey respondents said, as well as the creation of an Arctic Council foundation or permanent fund.

The council’s lack of self-assessment procedures, along with its inability to make binding decisions were identified as areas for improvement.

Respondents also pegged the council’s need for a permanent secretariat and better coordination with regional organizations.

Scores on questions related to the clarity of the council’s goals and strategies ranged from “very little” to “somewhat” positive.

Some even suggested a reorganization of the council’s structure and the configuration of its working groups.

As one respondent notes in the survey report, the council “…seems to be locked in old positions about how to organize itself and work. Since its creation, the AC has been a shot gun firing in every direction at once.”

The Arctic Council was created under the terms of a ministerial declaration signed in Ottawa in 1996.

The council was intended to promote cooperation, coordination and interaction among the Arctic states, although the survey’s authors point out that “the language of the declaration itself is general and not very strong.”

But the council has emerged as a prominent player in Arctic affairs, producing scientific assessments, highlighting the concerns of Arctic indigenous peoples and creating the agreement on search and rescue in the Arctic last May, the report noted.

The Nuuk declaration adopted in May 2011 also includes a decision to provide the council with a permanent secretariat.

As the survey’s authors suggest, all the suggestions presented in the survey would be “a tall order” for any organization to tackle.

“But a failure to come to terms with these challenges will lead to a marked decline in the effectiveness of the council during this decade,” the authors say.

“Success, on the other hand, can create conditions under which the effectiveness of the Arctic Council rises as we seek to come to terms with new issues arising in this increasingly important part of the world.”

Ninety individuals responded to the questionnaire – a group distributed evenly among the Arctic States with the exception of Russia, the report notes.

Responses came from senior officials of the council, its working groups, local or regional organizations, observer states, non-governmental observer organization and a group defined as “science, business or industry.”