“It is clear that we must reduce carbon dioxide emissions” 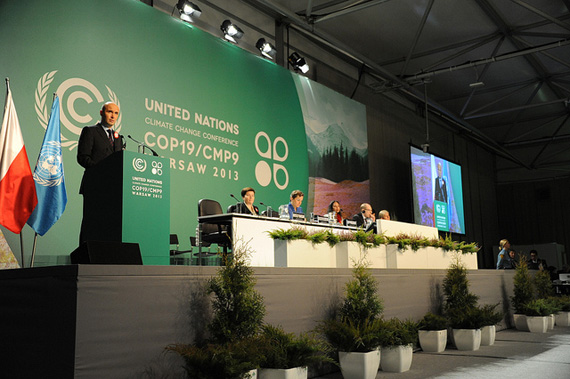 With an international climate change conference underway in Warsaw, Poland, the eight member states of the Arctic Council say they remain committed to work with other countries under the United Nation’s Framework Convention on Climate Change to reduce global greenhouse gas emissions.

In a Nov. 20 statement addressed to the conference, the Arctic Council, chaired by Canada, said global cooperation is key to meeting its long-term goal: to hold the increase in global average temperatures below two degrees above pre-industrial levels.

“To effectively address the impacts of climate change in the Arctic, it is clear that we must reduce carbon dioxide emissions, coupled with actions to reduce emissions of short lived climate pollutants, particularly black carbon, methane, and hydrofluorocarbons, which are contributing significantly to near-term impacts in the Arctic,” said the council’s Nov. 20 statement.

“Furthermore, through observations and experiences with changes in the Arctic, we recognize that we will need to do more to adapt and increase our resilience to climate change.”

That has led the Arctic states to mandate a task force to oversee reductions in both black carbon and methane, released by burning fossil fuels and melting permafrost.

That effort aims to reduce Arctic warming by up to 0.7 degrees Celsius, the council said.

And that work is crucial, the council added, as Arctic states are noting rapid changes to their climate and physical environments, with widespread effects on communities and ecosystems.

“Since the late 1970s, Arctic inhabitants and scientists have observed rapid reductions in snow and ice cover,” the statement read. “September 2012 marked the lowest sea ice extent ever recorded. Arctic inhabitants are highly sensitive to climate change, and are among the first to experience its impacts.”

As the Arctic Council’s chair, Canada made the statement on behalf of its member states: Denmark, Finland, Iceland, Norway, Russian, Sweden and the United States, as well as the council’s six indigenous permanent participant organizations.

The council also acknowledges the new observer states it welcomed earlier this year.

“We look forward to working with them, to make even greater progress on addressing climate change and its impacts,” the statement read.

Federal environment minister and Nunavut MP Leona Aglukkaq is leading the Canadian delegation to the meeting.