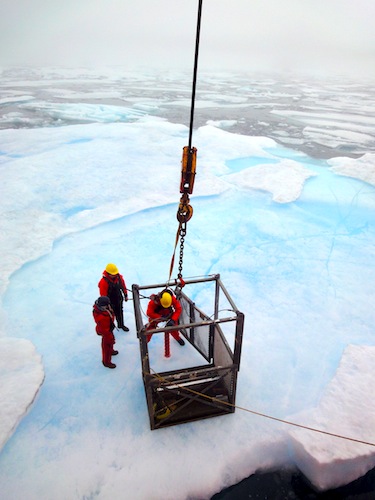 Scientists from the Amundsen research icebreaker drill into the Arctic Ocean sea ice. Research shows the waters of the Arctic Ocean are becoming increasingly acidic — which ministers attending the Arctic Council ministerial May 15 in Kiruna will consider. (PHOTO BY JANE GEORGE)

The warming impact of soot and methane on the Arctic climate and the increasing acidification of the Arctic Ocean: these are among the key issues that the Arctic Council’s various working groups will formally present May 15 to the Arctic Council ministerial gathering in Kiruna, Sweden.

The Arctic Council’s working groups plan to discuss their science findings at a May 14 science symposium in Kiruna.

Then, they’ll present policy recommendations flowing from those findings May 15 to Leona Aglukkaq, Canada’s minister responsible for the Arctic Council, United States Secretary of State John Kerry and other top ministers from the council’s other member states, Russia, Finland, Sweden, Norway, Denmark and Iceland.

The heads of the Arctic Council’s working groups have been told not to reveal their policy recommendations before May 15.

When asked what recommendations the circumpolar ministers would receive on how to prevent more ocean acidification, “that’s the thing — they’ve embargoed it,” Lars-Otto Reierson, who heads the Arctic Monitoring and Assessment Program, said May 13 in an interview from Kiruna.

“We got very strict ‘don’t release that message before the ministerial meeting,” said Reierson, whose group will release its report on ocean acidification and accompanying recommendations May 15.

Reierson did say taking action to curb acidification is “urgent, based on what the scientists told us.”

Marine ecosystems in the Arctic are “very likely to experience significant changes due to ocean acidification,” states the AMAP report.

As seawater becomes more corrosive, the impact will ripple through the food chain, making it hard for fish to find food or for whales to navigate by sound.

The AMAP report says everything, from plankton to fish and marine mammals, is at risk of being affected by ocean acidification directly or indirectly.

To curb the acidification of the Arctic Ocean and other oceans “you have to reduce the emissions of carbon dioxide,” Reierson said.

Some mention of the need to deal with ocean acidification is likely to surface in the Kiruna Declaration, to be released at the end of the May 15 meeting.

But the ministers are likely to pass the responsibility for taking any action on acidification to other international organizations, such as the United Nations — although its efforts to find a global agreement on curbing emissions haven’t yet been successful.

The Nuuk Declaration, produced at the end of the Nuuk ministerial meeting of 2011, did urge nations to work on a global agreement to keep the world’s average temperature rise within two degrees Celcius — which scientists say will already result in a much steeper temperature increase for the Arctic.

But that hasn’t happened yet. With the concentration of carbon dioxide in the atmosphere now equal to that found 3.5 million years ago when temperatures were as much as 14 C to 22 C warmer than today, the message from Nuuk didn’t produce action.

As for dealing with black carbon or soot and methane, the Arctic Council’s task force wants to continue its work towards some kind of Arctic Council agreement in 2015.

But that would likely be a non-binding agreement — a set of actions that countries would agree to take on voluntarily.

And much of the methane that contributes to heating in the Arctic — 60 per cent, according to a member of the council’s task force — comes from oil and gas development in the Arctic region.

On May 15 ministers will also accept reports, including:

• the Arctic Ocean Review, on the management of the Arctic marine environment;

• the Arctic Biodiversity Assessment, which looks at 21,000 Arctic species; and,

• the Arctic Resilience report on the capacity of Arctic residents to manage and overcome disturbances such as mining developments, part of a larger Arctic Change Assessment for the Arctic Council.