“Inuit culture is not exotic. It is Canadian culture” 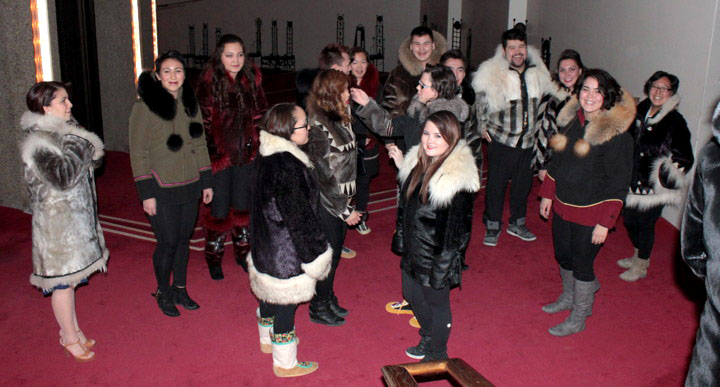 Sealskin models wait for their cue offstage at ITK’s annual A Taste of the Arctic celebration of northern foods and culture. (PHOTO BY LISA GREGOIRE) 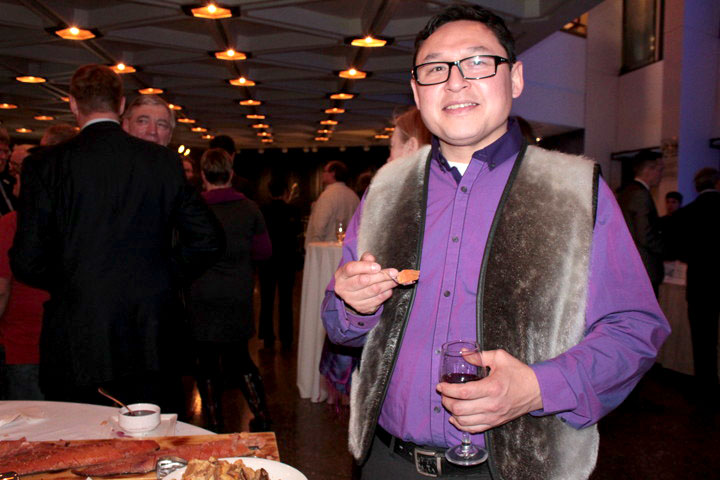 Herb Nakimayak, of Inuit Circumpolar Council-Canada, said the fish dishes made him think of his home in Paulatuk, NWT. (PHOTO BY LISA GREGOIRE) 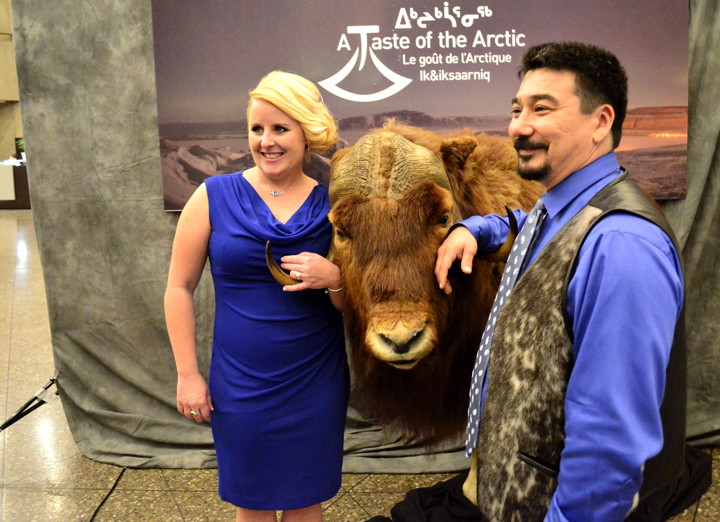 ITK President Terry Audla and his partner Terri Lynn Potter, pose at the muskox photo booth at the March 10 A Taste of the Arctic event in Ottawa. Audla says he invited Don Cherry to attend the seal-friendly event but he declined. (PHOTO BY JIM BELL) 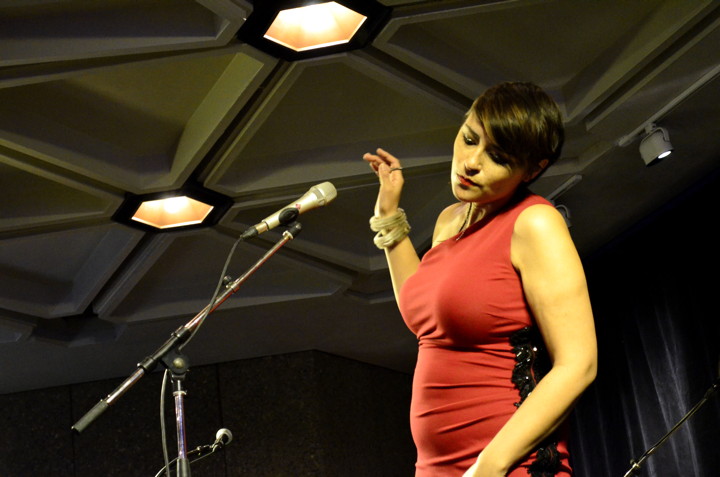 OTTAWA — Herb Nakimayak is from Paulatuk in the Northwest Territories and if you want to know the truth, he’s crazy about fish.

If you had to find him in a hurry on the evening of March 10, you only needed to stand near the fish and seafood platter at the lobby of the National Art Centre in Ottawa.

“I grew up on whitefish and char so for me, it brings back my younger days, when I was a teenager, trapping, the celebrations we’d have in the fall, sharing with the whole community,” said Nakimayak, an executive member of Inuit Circumpolar Council-Canada.

“I was a trapper when I was 14 years old. Then I went to school. I’m really grateful for that, the opportunity to do both and be effective in both worlds. My kids will never get that opportunity.”

There were a lot of stories about food circulating Tuesday night at A Taste of the Arctic, Inuit Tapiriit Kanatami’s fifth annual celebration of northern food, culture and entertainment. And stories of food often wind their way back to family.

Andy Pirti, Makivik Corp.’s treasurer, said he really liked the muskox burgers. When asked if he’d tried the maktaaq chicharrón — deep fried with a spicy vinegar dipping sauce — he smiled politely and then tried to answer politely, but kept closing his mouth instead.

“I had maktaaq last night, plain maktaaq,” he said eventually, carefully sidestepping the question. When asked if it was better, he nodded.

Originally from Akulivik, he now lives in Montreal. Southern living provides better job opportunities and services, he says, “but at the same time, the landscapes of home — I miss the hunting grounds and the people, my family.”

His eyes welled up a bit there. “You’re going to make me all emotional now.”

The evening saw its fair share of high heels, sexy dresses and seal skin vests. Anna Fowler, who works at ITK, looked fetching in a pair of sealskin leg warmers that zipped up the back of her calves over a pair of leather boots.

But if you could pull your eyes from the handsome crowd, there was plenty to put on your plate.

As if that wasn’t enough to make you ditch the diet, turn around and you’d find the aforementioned seafood platter, which had shrimp, mussels in the half shell and velvety Arctic clam chowder with pan-fried bannock.

A third table had finger foods: nikku (dried caribou) in a green lentil stew, seaweed rice wraps, pipsi (dried Arctic char) over a caper and fennel slaw and the maktaaq.

Once guests — who paid $199 for this feast of food and drink — had been given a chance to sample what NAC Executive Chef John Morris had to offer, ITK president Terry Audla took to the stage to welcome everyone.

“This is Canadian cuisine at its finest — and I truly believe that these dishes could find a home on any fine dining menu in the country or around the world,” Audla said.

He then told the audience he had invited Don Cherry — the churlish NHL Coaches’ Corner co-host who ridiculed colleague Ron MacLean for eating a seal burger in early February.

“Neither Cherry nor MacLean were able to attend,” he said. “That’s unfortunate.”

“Seal meat is delicious and nourishing,” he continued. “Sealskin is beautiful and fashionable. Inuit culture is not exotic. It is Canadian culture. It is our culture — all of ours, everyone in this room.”

That drew a hearty round of applause.

Nunavik singer-songwriter Elisapie stepped up to the stage soon afterward with her two piece band, singing songs in English and Inuktitut, barefoot, in a clinging, full-length red dress.

Young models showed off modern coats and accessories during a sealskin fashion show which followed and then DJ Madeskimo provided beats for the after-party.

At that point, most people made their way back to the crêpe bar. 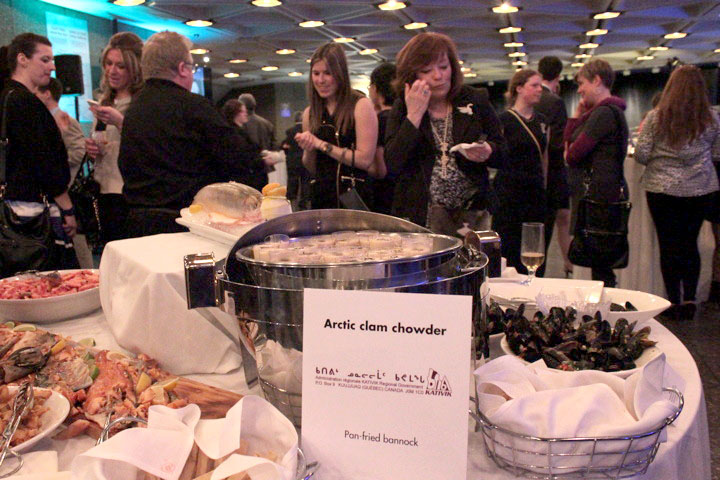 It was a thrill for the taste buds March 10 in Ottawa. Those attending this year’s A Taste of the Arctic got to sample a wide array of chef-inspired country food cuisine made with muskox, fish, seafood and even caribou. (PHOTO BY LISA GREGOIRE)