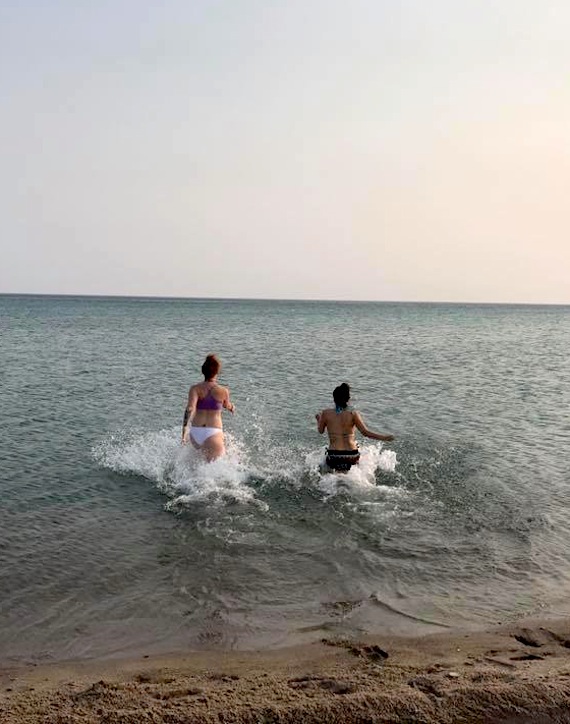 Brrrr? “We did it! We ‘swam’ in the Arctic Ocean mid-August,” says Cambridge Bay’s Jana Angulalik of her short dip with friend Emily Warren this past weekend. (PHOTO COURTESY OF J. ANGULALIK)

You can see the record-breaking temperatures on Aug. 12 in the Kitikmeot region in this map by weather-watcher Patrick Duplessis of Dalhousie University.

Unseasonably warm temperatures over the past weekend saw people in the western Nunavut hub of Cambridge Bay heading out to their cabins or the beach, where some even dipped into the Arctic Ocean to cool off.

However, it wasn’t so long ago—for example, in 1974, according to Environment Canada—that you could expect to find snow on the ground at this time of year.

Recently, temperatures have been rising 10 degrees or more above normal ranges for this time of year in Nunavut’s Kitikmeot region and the High Arctic islands, where the weekend’s heat wave broke Environment Canada records.

Kugluktuk also saw a high, but not record-breaking, temperature of 26.6 C on Aug. 10—with more warmth, and a high of 21 C predicted by Environment Canada for Aug. 14.

Pond Inlet and Arctic Bay, with temperatures of 18.3 C and 18.4 C respectively, on Aug. 13, also broke previous recorded temperatures for that date.

Today Iqaluit is also set to enjoy some above-average temperatures, with Environment Canada forecasting a high of 16 C—six degrees above the usual 10 C temperature for Aug. 14.

Such warm Arctic temperatures reflect recent findings in the 2016 State of the Environment, the annual summary of the global climate, from the American Meteorological Society, released Aug. 11, that says the Arctic is “is warming at more than twice the rate of lower latitudes.”

That represents a 3.5 C increase since record-keeping began in 1900, said the report, which includes a special section on the Arctic.

“Rapid change is occurring throughout the Arctic environmental system,” the report said, with many signals indicating that the “Arctic environment continues to be influenced by long-term upward trends in air temperature.”

You can see those influences in the “young and thin” Arctic sea ice cover in 2016, down by a third from 1981 to 2010 average, earlier and more rapid springtime melt, increased vegetation and the kind of dry conditions which have led to the wildfires still burning in northwest Greenland.

You can read the entire Arctic section of the report here.

Here you can see the new record temperatures for Aug. 13, shown on this map by Patrick Duplessis, circulated on his Twitter feed at @Pat_wx.