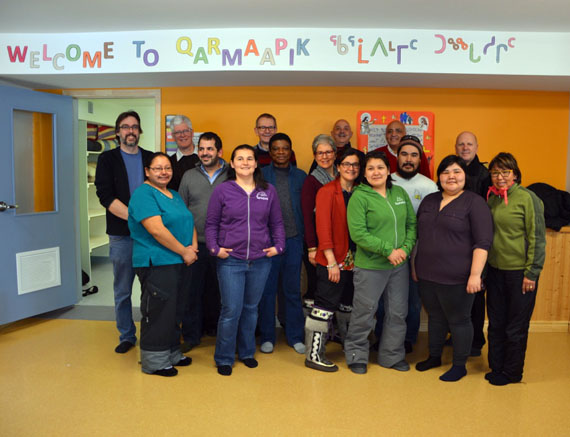 The Qarmaapik Family House opened last March in Kangiqsualujjuaq with a mission to provide a resource for children at risk of being put in youth protection as well as counselling for their parents and caregivers. (FILE PHOTO)

Heads up Nunavik: This could be your year to get a piece of the $1-million Arctic Inspiration Prize.

Two of the eight projects shortlisted for the 2016 edition of the prize are based in Nunavik, including the newly-opened Qarmaapik House in Kangiqsualujjuaq, a community-based resource centre that supports families in crisis.

The second Nunavik project shortlisted for the prize is Jeunes Karibus (Young Karibus), an outdoor education program that culminates in a cross-country ski expedition.

The Arctic Inspiration Prize’s selection committee announced the shortlist for its fifth annual prize Oct. 28, from which a group of three winners will be selected to share a $1 million prize.

Among the rest of the eight groups shortlisted, just one is Nunavut-based: te(a)ch, led by Pinguaq’s Ryan Oliver, which aims to deliver 52 weeks of computer science curriculum, including programming, game design and engineering to youth.

Other projects involve Nunavummiut such as the Inuit Tattoo Revitilization Project, led by Kitikmeot-raised, Yellowknife-based artist Angela Howak Johnston, which would deliver traditional Inuit tattooing workshops through the North.

SmartICE, led by Memorial University professor Trevor Bell, stands for sea-ice monitoring and real-time information for coastal environments. That project hopes to expand its service across the Arctic to inform winter shipping and ice-breaking activities.

NEXTT, a team of secondary and post-secondary educators and administrators and youth from Nunavut, Northwest Territories and Yukon, would develop a career support and training resource for high-school graduates across the North.

Two other Yukon-based projects round out the shortlist: the Old Crow Solar Project, which hopes to tap into solar energy in the territory’s northernmost community, and the Singletrack to Success Project, a plan to develop a cycling trail network across the North.

This year’s Arctic Inspiration Prize winners will be announced at a Dec. 8 ceremony in Winnipeg.