“Their eyes lit up and they said ‘I can hear!’” 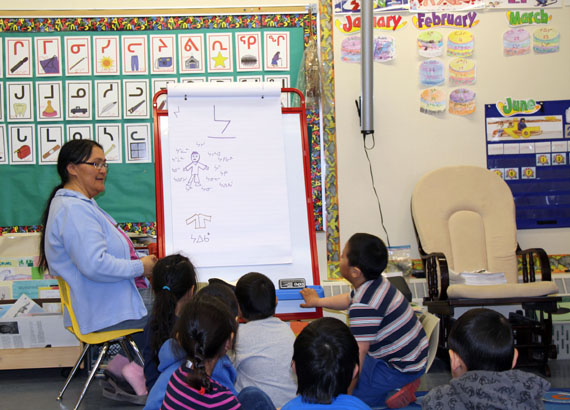 Alookie school teacher Licia Etooangat leads her class through an activity with the help of the newly-installed sound field system; Etooangat is fitted with a clip-on microphone that amplifies her voice through a long, thin speaker mounted on the wall. Better Hearing in Education for Northern Youth is working to install the systems in classrooms across the Qikiqtani region by 2017. (PHOTO COURTESY OF BHENY) 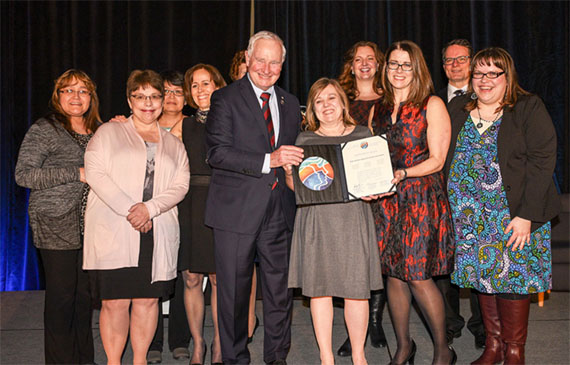 Members of Better Hearing in Education for Northern Youth receive the Arctic Inspiration prize in Ottawa this past January. (PHOTO COURTESY OF ARCTIC INSPIRATION PRIZE)

Imagine flicking on a switch to have more attentive students.

It’s sounds too good to be true, but when classrooms in Pangnirtung’s Alookie elementary school were outfitted with sound amplification systems earlier this month, principal Mary Etuangat said the change was immediate and noticeable.

The audio system, called Phonak Digimaster, is essentially a loud speaker installed in the classroom, with a clip-on microphone to amplify educators’ voices.

“They started using them right away, and they love it,” Etuangat said of Alookie’s amplification systems. “The first time the students heard it, their eyes lit up and they said ‘I can hear!’”

Alookie was the second school in the Qikiqtani region to have the new field system installed in each of its classrooms — Pond Inlet’s Ulaajuk school received their system in May — by the organization Better Hearing in Education for Northern Youth (BHENY.)

The new technology is in large part thanks to BHENY’s big win last winter, when the group took home $300,000 of the 2015 Arctic Inspiration prize, which funds wellness projects across Canada’s North.

The system is used to help students with hearing loss. It’s a widespread issue across Nunavut, often due to complications from ear infections, although identifying and treating it has been a slow process.

Guelph, Ont.-based audiologist Lynne McCurdy, a member of BHENY, notes there isn’t much data on hearing impairment in the North.

“But we can extrapolate… generally, it’s a 40 per cent higher incidence of hearing loss [in the North] than in the South,” McCurdy said.

“Which could mean 20 per cent of students in a given classroom have significant hearing loss and may have trouble hearing the teacher or their peers.”

And that leads to difficulties with both literacy and social skills.

Etuangat remembers her own daughter having issues with reading and writing English through elementary school.

Other members of Etuangat’s family have been treated for hearing loss over the years.

But treatment isn’t a given — some Nunavummiut are on wait-lists three years long.

The Iqaluit-based audiologist, Dr. Kim Hurley, is Nunavut’s only full-time audiologist and often only has the chance to visit communities once a year.

Of some 470 elementary students between Pangnirtung and Pond Inlet, BHENY members say only one student currently wears hearings aids.

That’s where BHENY hopes to step in.

“I’d like to see BHENY working on expanding audiology services,” Etuangat said. “It’s not right to have just one audiologist for the whole region.”

For now, the group is focused on installing the rest of the amplifications systems throughout the region’s schools.

Ataguttaaluk school in Igloolik and Nakasuk school in Iqaluit are scheduled for installations in September 2016, while all of Qikiqtani’s elementary classrooms should be outfitted by 2017.

But BHENY’s Arctic Inspiration prize win has provided the group with more than just funding; the win has also promoted their cause, raising awareness around hearing loss for Nunavummiut families.

“It’s starting to occur to people,” McCurdy said, “and people are starting to make the connection between lack of hearing and the inability to develop some good linguistic and social skills.

“So we’re starting to have an impact. We’ve opened the door to the conversation now.”