“One thing they keep saying about you up there Mr. Harper is you’re big sled, no dogs” 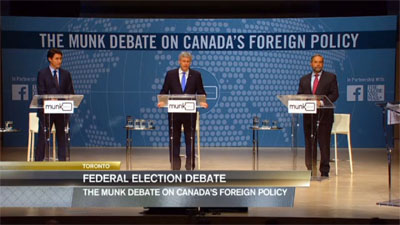 The Inuit and Canada’s North have “arrived,” Prime Minister Stephen Harper told a federal leaders’ debate Sept. 28 — in no small part thanks to his government’s efforts in the Arctic.

If Inuit in Canada feel they’ve been largely left out of the election campaign so far, they wouldn’t be wrong, but the Toronto-based Munk Debate on foreign policy changed that Monday evening, at least for a couple of hours.

The leaders’ debate included the three front-runners; Conservative leader and Prime Minister Stephen Harper, New Democratic leader Tom Mulcair and Liberal leader Justin Trudeau, who essentially traded barbs over who has had the most authentic experience in Canada’s North.

Harper called his annual trips to Nunavut a “precedent in Canadian history,” noting that “this kind of attention was simply never paid to this part of the country before.”

“I am particularly proud that we have a remarkable Inuit woman who sits in the cabinet of Canada,” Harper said in the debate, referring to his environment minister, the incumbent Nunavut MP Leona Aglukkaq.

“That is a real step forward to this country, and a real sign that those people…that the Inuit and the North has really arrived in our country.”

But Trudeau was quick to question the PM’s commitment to Nunavut and other northern regions, suggesting the Conservative’s Arctic policy has been all talk, and little action.

“One of things with talking with communities, and seeing how people are struggling through the winter with inadequate food security and challenges with infrastructure,” Trudeau told the debate. “The one thing they keep saying about you up there Mr. Harper is you’re big sled, no dogs.”

It’s not clear which region “up there” refers to, but the expression garnered laughter from the debate crowd and some buzz on social media.

@JorgeBarrera Never. Not once. In fact, it kinda sounds like something someone who hasn't met Inuit would say that Inuit said.

“The challenge we have is to understand that to have sovereignty over the Arctic, we have to support the communities, the people who live there, who’ve have lived there for a millennium,” Trudeau continued. “And that’s what you’re not doing enough of.”

Mulcair used the debate to plug his own Sept. 29 campaign stop in Iqaluit, a trip the NDP leader flagged as a chance to visit “Harper’s failures” in the North.

“In Canada’s North, as we’ve seen in Kuujjuaq recently … there’s a crisis around housing,” Mulcair said. “I’ve seen houses with 18 inhabitants in one room. How can a child do their homework?”

“This is a social and economic crisis that is ravaging our future generations. This is the government’s obligation, it reflects our deep-seated Canadian values and I will deal with this as soon as I become prime minister of Canada,” he said.

“This is top priority, we need to address the housing issues for First Nations and Inuit peoples.”