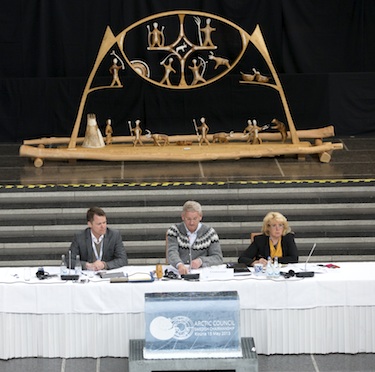 At the May 15 Arctic Council ministerial in Kiruna, Sweden, presided over by Sweden’s foreign minister, Carl Bildt, centre, at the Kiruna town hall, signed an agreement on Cooperation on Marine Oil Pollution Preparedness and Response in the Arctic. BY MARTINA HUBER/ REGERINGSKANSLIET)

KIRUNA, SWEDEN — The member nations of Arctic Council signed their second internationally binding agreement May 15 in Kiruna, Sweden: an agreement on Cooperation on Marine Oil Pollution Preparedness and Response in the Arctic.

“A potential oil spill could have a serious impact on the livelihoods of northerners,” Canada’s Arctic Council minister Leona Aglukkaq said at the meeting. “By acting together, here at the Council, we are enhancing our collective ability to respond.”

A guide to tackling potential oil spills in Arctic waters, signed by all eight Arctic ministers at the ministerial, the new agreement requires its signatories to work together to clean up an oil spill, should there ever be one anywhere north of the 66th parallel.

But, even if all of the Arctic states respond to the challenge, not everyone says the new agreement goes far enough in avoiding catastrophe in the Arctic.

In his address to the ministerial meeting, Michael Stickman, the chair of the Arctic Athabaskan Council, said that “this commitment is important, but the declaration is missing a crucial word: prevention.”

Stickman added, “committing to clean up oil spills after they happen is insufficient.”

The agreement targets the circumpolar states’ response to an oil spill by establishing guidelines for things like coordinating equipment and personnel and communicating across borders.

Countries are also obligated to notify each other in the event of an oil spill.

“The prospect of a potential oil spill event in the Arctic is very much on peoples’ minds,” David Balton, an ocean and fisheries expert with the United States Department of State and co-chair of the task force that produced the new agreement, said in a presentation after the May 15 ministerial meeting in Kiruna.

The melting of sea ice has lured oil companies north in the hopes of tapping into new sources of energy, so “we are anticipating, despite what some protesters may say — that there will be increased oil and gas development,” Balton said.

Which means, more tanker traffic in a region that is at once environmentally sensitive and exceptionally remote.

This is not the first agreement to try to plan for an oil spill in international waters, but Balton said it’s the first “pan-Arctic agreement” that targets the challenges of the circumpolar region.

In practical terms, it means all Arctic Council member nations are committing to equip themselves to respond to oil spills, meaning they will need things like equipment and plans for how they will respond.

“It’s a compelling issue of our time,” Balton said. “We need to do a better job of being ready for any potential oil spill events in the Arctic.”

Which means doing more than just signing the document.

Although all ministers have added their signature, each country now has to verify the agreement internally, a process Balton was “confident” would be done with the year.

Furthermore, Balton noted that the U.S. was not yet ready to fulfill the commitments required by the agreement.

And he noted, referring to the other Arctic nations, “I suspect we’re not alone in this.”

It is hoped, he said, that this agreement would act as “a program of work into the future” to spur countries to get ready for an oil spill.