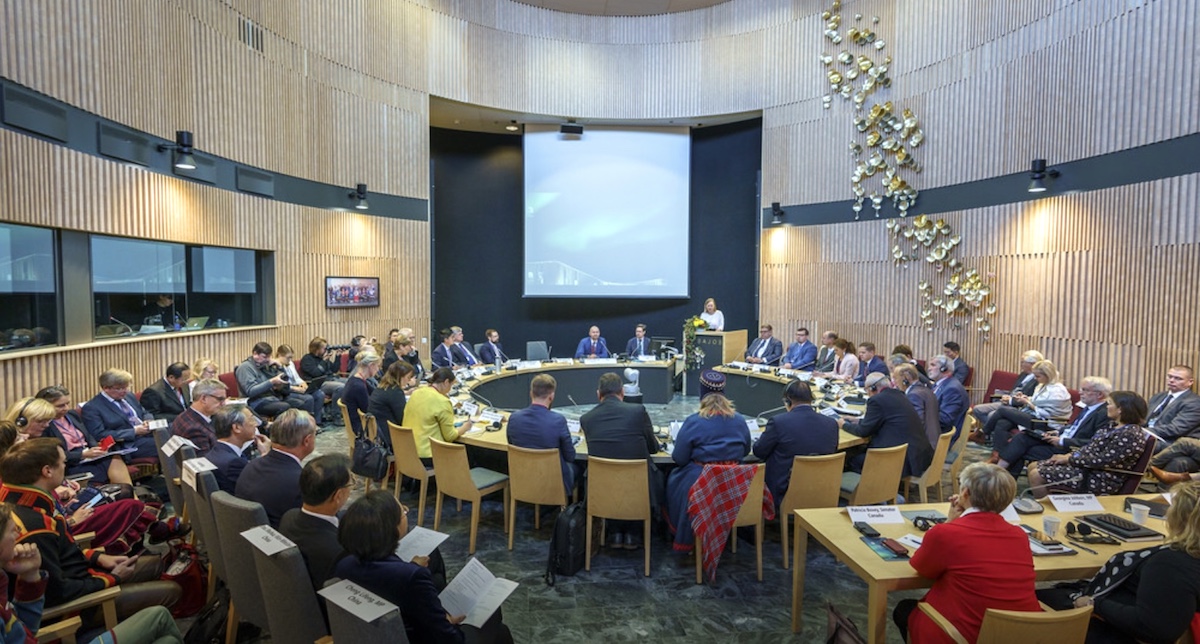 Arctic Parliamentarians discuss subjects of common interest in Inari, Finland, at the Saami Parliament, during their conference held every two years in an Arctic location. (PHOTO COURTESY OF THE ARCTIC PARLIAMENTARIANS)

A statement issued this week by Arctic parliamentarians at the end of their three-day conference, on Sept. 19, in Inari, Finland, could provide a plan for what should be done in the Arctic region.

Its five pages of recommendations will hopefully guide the Canadian government in its policies and decision-making, Yukon MP Larry Bagnell told Nunatsiaq News on Thursday afternoon, shortly after his return from Inari.

Bagnell and others at the meeting from Canada, including Nunavut Senator Dennis Patterson, plan to table the statement in the House of Commons and the Senate.

In the statement, they, along with about 50 other elected representatives from Denmark, Greenland/Faroe Islands, Finland, Iceland, Norway, Russia and Sweden, proposed high-level national meetings to see more action on Arctic concerns.

Their statement makes the call—once again, said Bagnell—for an Arctic summit. This summit would involve the heads of state and governments of the eight Arctic Council member states, as well as the heads of the Indigenous organizations that are permanent participants, seeking agreement on Arctic co-operation and the sustainable development of the Arctic region.

Such an Arctic summit was also proposed this summer by Finland’s president, Sauli Niinistö, who said the meeting could lead to an agreement on reducing climate-warming black carbon emissions in the Arctic.

In their statement, the Arctic parliamentarians also threw their support behind actions to curb climate change.

Their statement notes “with grave concern that the Arctic is warming at more than twice the global average, resulting in rapid social, environmental, and economic impacts in the region and worldwide, and the pressing and increasing need for mitigation and adaptation actions and to strengthen resilience.”

The parliamentarians also underlined the need to prevent oil spills and other pollutants, and they urged the full implementation of the International Maritime Organization’s Polar Code and the United Nations resolution to eliminate plastic pollution in the oceans.

As well, they said they would like to see a conference of experts from Arctic nations share data and best practices in the field of mental health, including fetal alcohol spectrum disorders, “focusing on prevalence, prevention, and justice.”

Collaboration on tackling FASD is something that Bagnell has tried to encourage. In 2016, his private member’s bill, Bill C-235, which was defeated, would have seen FASD diagnoses considered when sentencing offenders.

A conference on FASD, such as that called for in the Arctic parliamentarians’ statement, would see a wide range of experts, from the regional, national and international levels, coming together, Bagnell said. These health experts aren’t usually involved in Arctic meetings, Bagnell said.

In addition to a conference on FASD, the statement calls for a study of the causes and prevalence of suicide in the Arctic region, especially among youth, and “to support the continuation of circumpolar cooperation on suicide prevention.”

To improve digital access in the Arctic, the parliamentarians suggest holding an Arctic Council meeting that would involve the ministers responsible for communications and lead to the creation of a working group of national Arctic governments on telecommunications.

Such a working group could, for example, explore co-operation in developing digital access in Arctic communities, such as through shared undersea cables or satellites, the statement said.

The Arctic parliamentarians want to see a greater focus on business development in the Arctic, with the creation of an Arctic corporate social responsibility group and a circumpolar Arctic business index.

The United States did not sign the Arctic parliamentarians’ statement, but that’s because its Congress is in session, Bagnell said.

This meant that Lisa Murkowski, who represents Alaska in the Senate, could not attend. She is also a member of the steering committee of the group, officially known as the Standing Committee of Parliamentarians of the Arctic Region.

“As it is virtually impossible to schedule the conference so that it would suit all nine parliaments, the host parliament has to decide the date so that it is convenient both to itself and for most of the parliaments,” said Samu-Ville Paukkunen, the secretary general of the committee.

“The practice has been that the statement has been signed by only those able to attend, since the drafting committee works with the statement draft quite actively, as we saw in Inari.”

The Arctic parliamentarians plan to meet next in Norway in 2020.