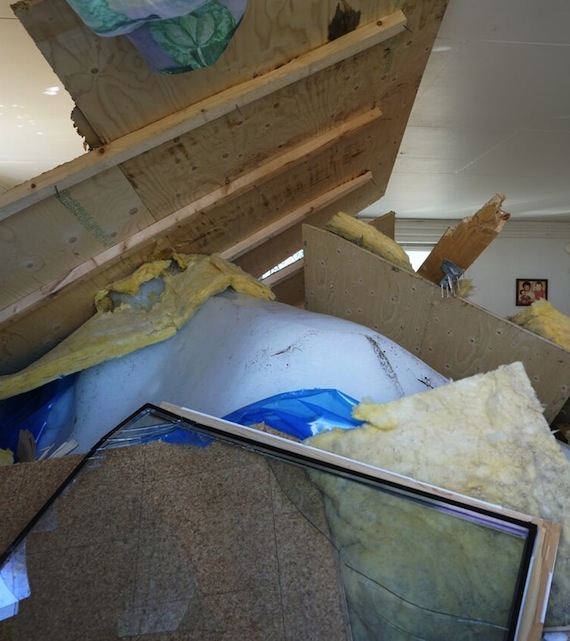 The floor of this house in Nuugaatsiaq is now punctured by an iceberg, leading the team of experts who recently visited the site of the June 18 tsunami to believe the house was torn off its foundation by the wall of water and then dropped down on the ice. (PHOTO BY HERMANN FRITZ) A store in Nuugaatsiaq, a village in northwestern Greenland, lurches to one side in this photo taken more than two weeks later by experts sent in to evaluate the tsunami that hit the village June 18. (PHOTO BY HERMANN FRITZ)

The Arctic remains at risk from the kind of landslide and resulting tsunami that tore into the northwestern Greenland village of Nuugaatsiaq June 18, a tsunami expert told Nunatsiaq News.

“Both freezing and thawing, sea level rise as well as deglaciation may increase the number of landslides and associated tsunamis,” Georgia Technical Institute professor Hermann Fritz, who recently returned from Greenland, said in an email from Indonesia.

Powerfully fast, arriving at Nuugaatsiaq in northwestern Greenland only five minutes after a landslide 30 kilometres away across the Karrat fiord, the tsunami swept away four residents of the coastal community.

With the support of the National Science Foundation and the Geotechnical Extreme Events Reconnaissance Association, Fritz traveled to Greenland with University of Oregon volcanologist Thomas Giachetti, and geotechnical engineer Scott Anderson of BGC Engineering to collect data about the disaster and to create a three-dimensional reconstruction of the landslide that triggered the tsunami.

During their July 5 to July 10 stay in Greenland, the researchers also looked at all the videos taken by residents during the tsunami as it overcame Nuugaatsiaq, wrecking buildings and taking others out to sea, to find out why some in the village of about 100 people managed to escape the wall of water, while others could not.

What they found is that a combination of a small earthquake from the plunge of the landslide, the sound, and unusual iceberg motion in the fiord prompted most in Nuugaatsiaq to flee.

But that short time was wasn’t long enough for four residents— three adults and a child— to escape the implacable wall of water, which Fritz said reached as high as 90 metres along the coastline on the same side as the landslide and 50 metres directly across fiord.

The researchers also plotted how the landslide—and not an earthquake, as was initially thought—from 1,000 metres up a steep slope on the fiord generated the tsunami.

The tsunami was reminiscent of a 1958 landslide-generated tsunami in Lituya Bay, Alaska, where narrow fiord and shallow water in the bay resulted in the highest tsunami run-up in recorded history, Fritz said.

The Greenland landslide, by contrast, Fritz pointed out in a recent Georgia Tech news release, plunged into deeper water and a much larger fiord system.

Preliminary estimates show the Greenland landslide had at least as much — and maybe greater—volume than the Lituya Bay rockslide, the researchers’ preliminary observations have shown.

In Nuugaatsiaq, among other things, Fritz and his fellow researchers saw an iceberg in the middle of a house, where it had pierced the floor.

The researchers concluded the house must have floated off its foundation when the tsunami came ashore and then dropped down on the iceberg as the water receded.

In Greenland, the researchers also studied a second “active” landslide site along the Karrat fiod, which remains a risk to the three villages of Illorsuit, Niaqornat and Nuugaatsiaq.

The Greenland government said Aug. 3 that due to the high risk of another tsunami in Illorsuit and Nuugaatsiaq, residents should not return to their homes there.

An environmental cleanup is now underway in the villages, a government release said.

To help the displaced, donations from Greenland’s neighbours poured in after the tsunami, including $25,000 from the Government of Nunavut and several hundred dollars from Iqaluit’s Joamie elementary school, whose students held a fundraiser.