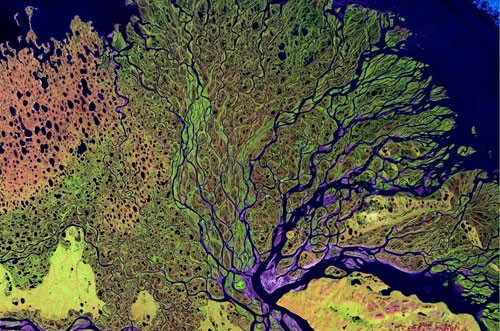 This is how Siberia’s Lena River delta looks from space. The Lena is one of several major rivers that flows northward into the Arctic Ocean. (IMAGE COURTESY OF NASA)

Environmental scientists at Harvard University have found that mercury carried by river water is adding lots of mercury, a toxic element, to the Arctic Ocean.

While research has already shown how wind currents move mercury to the Arctic, it now appears that rivers carry twice as much mercury into the Arctic Ocean, says a May 21 news release on a new research study, which appeared May 20 in the journal Nature Geoscience .

Mercury is a naturally occurring element, which is also put into the environment by activities such as coal-burning power plants, incineration and mining.

Once mercury enters the atmosphere, it can drift around for up to a year, until it falls back to the ground in rain or snow.

Much of the mercury that gets deposited on to Arctic snow and ice evaporates back into the atmosphere, which limits its impact on the Arctic Ocean.

But mercury from many rivers flows straight into the Arctic Ocean, the study found.

There, mercury converts into methylmercury and it can accumulate in fish and wildlife at concentrations up to a million times higher than the levels found in the environment.

“In humans, mercury is a potent neurotoxin,” said researcher Elsie M. Sunderland. “It can cause long-term developmental delays in exposed children and impair cardiovascular health in adults. Indigenous people in the Arctic are particularly susceptible to the effects of methylmercury exposure because they consume large amounts of fish and marine mammals as part of their traditional diet.”

That’s why understanding the sources of mercury to the Arctic Ocean and how these levels are expected to change in the future is “key to protecting the health of northern populations,” she said.

The largest rivers flowing to the Arctic Ocean can be found in Siberia: the Lena, the Ob, and the Yenisei. These are three of the 10 largest rivers in the world, and together they account for 10 per cent of all freshwater discharge to the world’s oceans.

As global temperatures rise, permafrost thawing may release mercury that was locked in the soil and further add to the amount of mercury that enters Arctic rivers, say the researchers.

Climate change could have a very large impact on Arctic mercury, larger than the impact of controlling mercury emissions to the atmosphere, they say.