More than 70 sacred sites custodians, officials from indigenous organizations, scientists and government policy makers gathered in Finland last week to draft a joint declaration with recommendations and guidelines for policy-making related to sacred sites in the Arctic.

They called for better recognition, legal protection and management for the sacred sites and sanctuaries of indigenous peoples in the Arctic region.

They also asked to be able to enforce measures to protect the land and its sacred natural sites against possible damage and destruction caused by development, such as dams, road construction, military activities, mining, forestry and “irresponsible tourism.”

And they urged states to ratify Convention No. 169 of the International Labour Organisation on the rights of indigenous peoples and their cultural and spiritual heritage.

The draft conference declaration on sacred sites emphasizes the need to recognize the right to self-determination of indigenous peoples and their “active and decisive participation” in all planning, research and decision-making as these affect their sacred sites.

“This move demonstrates the need for action and highlights how important the safeguarding of sacred sites is for the conservation of fragile biological and cultural diversity in the Arctic regions, the transmission of culture and identity across the Arctic, and upholding the sustainable development in the North,” said a conference organizer, Thora Herrmann from Université de Montréal.

“Sacred sites play also a key role in traditional cultures and lifestyles across the Arctic.”

Called “Protecting the sacred: Recognition of Sacred Sites of Indigenous Peoples for Sustaining Nature and Culture in Northern and Arctic Regions,” the conference attracted participants from six Arctic countries to Rovaniemi and Pyhätunturi, Finland, between Sept. 11 and Sept. 13.

The Pyhätunturi mountain, about 150 kilometres north of Rovaniemi, is now the site of a ski resort — although its name means “holy mountain” in Finnish. 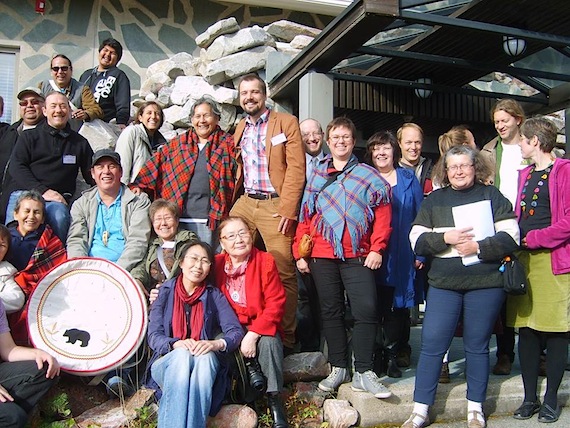 Some of the participants in the Arctic sacred sites conference in Rovaniemi. (PHOTO BY FRANCIS JOY/ ARCTIC CENTRE)