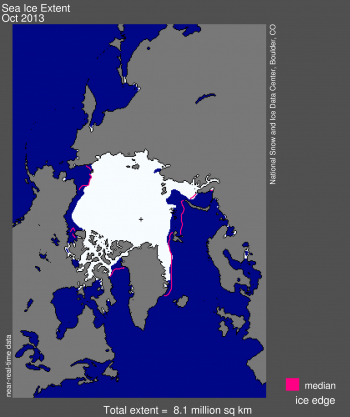 As winter settled into the Arctic throughout October, sea ice cover remains among the lowest in more than three decades, says new data from the Colorado-based National Snow and Ice Data Center.

The year 2013 marks the first October since 2009 where the sea ice extent is more eight million square kilometres — that’s about 103,000 square kilometers of growth per day.

That makes it the sixth lowest October for sea ice extent in the NSIDC’s 35-year satellite data record, more evidence of a long-term downward trend in Arctic ice cover.

The actual rate of ice growth is slower than last year’s, when ice extent doubled during the month of October, although the ice cover is more extensive overall than in 2012.

As of early November, small areas of the Beaufort, Chukchi, and Kara seas remained ice-free, while the East Siberian and Laptev seas have completely frozen over.

“Higher than average air temperatures have been observed over the ice-free regions, while the rest of the Arctic is at near average to below average temperatures,” the NSIDC said Nov. 6.

While the sea ice cover was higher this past summer compared to previous summers, it remained low compared to long-term data readings, leaving larger regions of water open and able to absorb the sun’s energy

Before the ocean can refreeze in the fall, it releases that excess heat back to the atmosphere, creating higher than average air temperatures.

In October, air temperatures remained two to four degrees higher than average over much of the western and central Arctic, including Greenland and the Canadian archipelago.

And those temperatures appear to be having an impact on the ground too.

The NSIDC’s more than 30 years of remote sensing data show that the decline in sea ice extent corresponds to land surface warming in some Arctic regions.

The Arctic tundra in Nunavut and Greenland is getting greener as it receives more summer warmth, although the NSIDC hasn’t noted that increase in Alaska and Eurasia.