But not in Baffin and Hudson bays 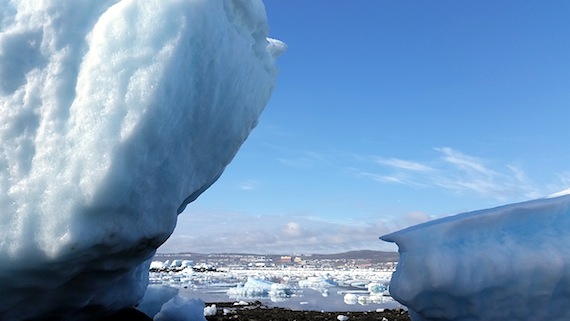 Ice extent may be down overall in the Arctic, but in Baffin Bay — and close to Iqaluit, seen here Aug. 3 — there’s been no lack of ice this past summer. (PHOTO BY THOMAS ROHNER) 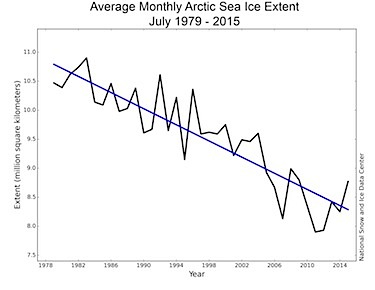 Although ice has persisted in Baffin Bay and Hudson Bay, overall Arctic sea ice extent is well below average for this time of year, the Colorado-based National Snow and Ice Data Center said Aug. 5.

And the Northwest Passage is still clogged with ice, the NSIDC’s satellite tracking images also show.

Overall, Arctic sea ice extent averaged for July 2015 came in as the 8th lowest in the satellite data record, the NSIDC said.

But elsewhere in the Arctic, ice extent was below average in Kara, Barents, Chukchi, East Siberian, and Laptev seas and near average in the Beaufort Sea and East Greenland Sea.

Still, Arctic ice extent remained higher overall than in 2012, largely due to the ice in Baffin and Hudson bays, the NSIDC said.

Throughout July, ice in the two bays remained more extensive than in recent summers, adding an extra 500,000 square kilometres of ice to the Arctic total.

Areas in the bays, which are normally navigable at this time of year, continue to be clogged with ice, the NSIDC noted.

July’s heavy ice conditions made resupply difficult for some coastal communities in Nunavut and Nunavik, delayed an Arctic science mission, and allowed polar bears, which are usually farther out on the ice edge at this time of year, to come into Iqaluit, the NSIDC said.

Although sea ice extent remained more extensive than average within Baffin Bay and Hudson Bay, Arctic sea ice retreated at near average rates during the month of June.

Melt overall started early in 2015, but came later than average in Baffin Bay.

However, higher up, air temperatures were warmer than usual, the NSDIC notes: temperatures at 914 metres above sea level reached nearly 6 C above average directly north of Greenland.