Arctic sea ice extent has dropped 45 per cent since 1979 Every year there’s less of the multi-year, blue-tinged sea ice, like this ice seen in the Northwest Passage, in the Arctic. (PHOTO BY JANE GEORGE) 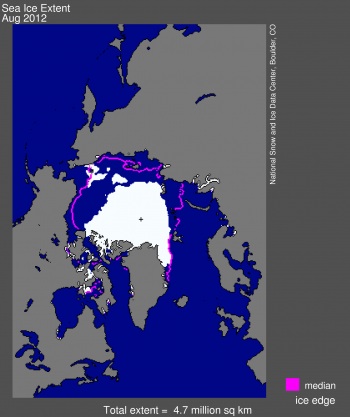 Arctic sea ice extent for August 2012 was 4.72 million sq. km.The magenta line shows the 1979 to 2000 median extent for that month. The black cross indicates the geographic North Pole. (IMAGE COURTESY OF THE NSIDC)

Compared to September conditions in the 1980s and 1990s, the Arctic sea ice extent has dropped by 45 per cent, the Colorado-based National Snow and Ice Data Center said Sept. 5.

And that skimpy sea ice cover is likely to get lower yet, because at least one more week remains in the melt season.

Throughout the month of August, Arctic sea ice extent tracked below levels observed in 2007, leading to a new record low for that month of 4.72 million sq. km. since 1979.

By the end of the month, daily extent had dropped below four million sq. km.

At the end of August, ice still remained in the Western Parry Channel, and neither the northern or southern routes of the Northwest Passage were totally open.

While much of the ice has cleared out, some still remains, the Canadian Ice Service says.

But much of this ice is young.

The age of ice is an important indicator of the health of the ice cover, the NSIDC notes.

That’s because old ice, also called multi-year ice, tends to be thicker and less prone to melting out in summer.

Between mid-March and the third week of August, the total amount of multi-year ice within the Arctic Ocean declined by 33 per cent, and the oldest ice, ice older than five years, declined by 51 per cent, the NSIDC said.