But in some places, such as northern Canada, thick ice converged and increased 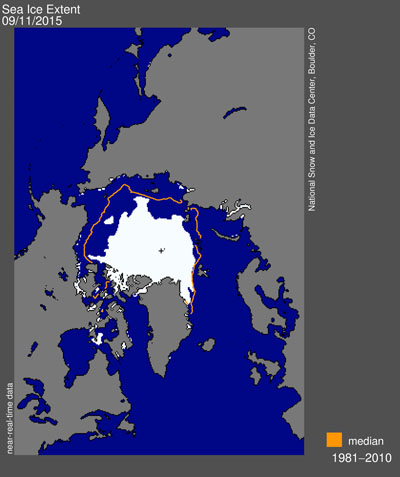 Arctic sea ice extent for Sept. 11 was 4.41 million square kilometres. This map shows that clockwise wind patterns pushed thick ice into the Canadian Arctic Islands, parts of the Northwest Passage and areas north of Greenland. The Northern Sea Route and the Beaufort and Chukchi seas are virtually ice free. (IMAGE COURTESY OF THE NSIDC)

And, as the Colorado-based National Snow and Ice Data Center predicted earlier this month, the minimum Arctic sea ice extent ranks as the fourth lowest in the satellite record, which started in 1979.

A map that the NSIDC generates from satellite data shows that clockwise wind patterns caused by “anticyclonic” atmospheric conditions have caused thick ice to converge in the Canadian Arctic Islands and an area north of Greenland, increasing ice thickness by up to 30 per cent.

That’s why sections of the Northwest Passage still have some ice.

But the Northern Sea Route north of Russia and most of the Beaufort and Chuckchi seas experienced high melt rates and are completely ice free.

“If this thicker ice were transported to areas of high melt rates (like that in the southern Beaufort), it would have an impact on summer ice coverage,” the NSIDC said.

Changing winds or late-season melt could still reduce the Arctic sea ice extent, as was the case in 2005 and 2010, the data centre said.