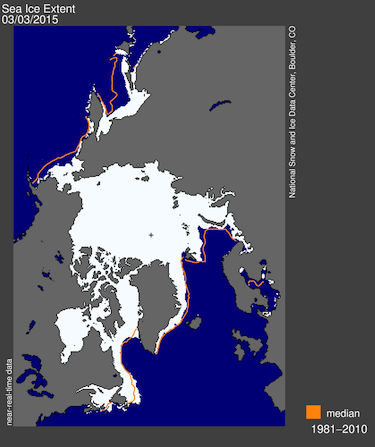 Arctic sea ice extent for February 2015 was 14.41 million square kilometres. The magenta line shows the 1981 to 2010 median extent for that month. The black cross indicates the geographic North Pole. (IMAGE COURTESY OF THE NSIDC)

Ice observers in Denmark and the United States are watching Arctic ice carefully as this nears its largest annual extent in two or three weeks.

Previous years have seen a surge in Arctic ice extent during March.

Its satellite images show Arctic sea ice extent continues to track well below average, but the NSIDC said it’s still unclear whether March will see an increase in ice, or establish a record low maximum — that was set in 2005.

On March 3 this year’s extent remained 50,000 square kilometres above the record low for the month from 2005.

Arctic sea ice extent did increase by 429,000 square kilometres during the month of February.

But this gain was slightly less than the average for the month, the NSIDC said. The monthly average Arctic sea ice extent for February was the fourth lowest in the satellite record.

Through 2015, the rate of decline for February extent has come in at 2.9 per cent per decade.

Its online maps are updated on a daily basis and show the ice extent in the northern hemisphere.