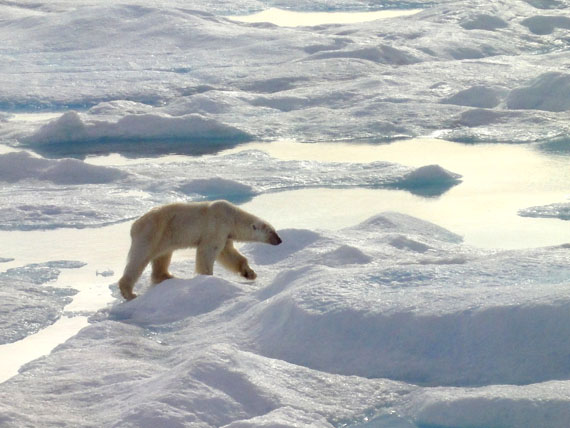 A polar bear heads across the sea ice in this photo taken off Baffin Island. (FILE PHOTO)

How much sea ice do polar bears need before heading onto land: that’s the question that biologists from the University of Alberta wanted to answer.

Their recently published study found that polar bears started to migrate onto land only when sea ice cover dropped below 50 per cent.

For their research, the researchers used GPS data from 20 polar bears tagged and collared in western Hudson Bay.

They also pulled a tooth from each collared polar bear to determine the animals’ age.

The collared polar bears, whose mean age was 17 years, traveled back to land over a roughly one-month period, between June 28 and Aug. 7, said their research paper in the online Ecology and Evolution journal.

The rate of polar bears returning to land increased greatly as the sea ice cover deteriorated further, said the authors.

The authors for the latest University of Alberta report include Seth G. Cherry, Nicolas J. Lunn and Andrew E. Derocher.

Nunavut isn’t looking to the future, 35 to 45 years from now, equal to two or three polar bear generations, Derocher said then.

Part of the Nunavut government’s position is that polar bears can and have adapted to changes in climate in the past.

But Derocher said that’s just not so, and that “the long-term situation for polar bears is extremely dire.”

The most recent paper argues that information collected through collared polar bears is crucial to understanding the effects on polar bear populations as climate change continues to affect sea ice conditions.

Continued monitoring between the environment and polar bear migration timing “may be a key aspect of [understanding] behavioral changes as a result of future climate change,” the paper suggests

And that change may include less ice on Hudson Bay.

“The longer-term projections for sea ice conditions in Hudson Bay suggest the duration of the on-land period will increase with negative demographic consequences,” the paper states.

Some Kivalliq communities, like Arviat, struggle with more polar bears coming into town and lobbied the Government of Nunavut for more polar bear tags to control the population.

The University of Alberta authors acknowledge that while deteriorating ice conditions are the main factor spurring polar bears back to land, the animals still require “continued periods of exposure” to the bad ice before they move to land.

They call for increased research on polar bears in the region, using GPS data to better understand the larger migration patterns of polar bears as well as the “responses and trends associated with climate change.”

But many Inuit hunters oppose the invasive survey practices by scientists which involve tranquilization or collaring polar bears for GPS tracking, arguing that the device chokes the animal.