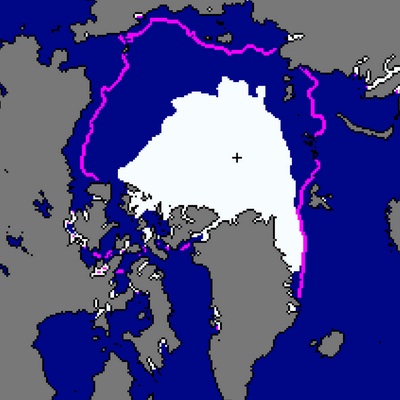 This image of a tiny Arctic sea ice extent cropped up in early April on the National Snow and Ice Data Center’s website: it’s now been pulled along with other images from April, which the NSIDC maintains were caused by a bad sensor on a satellite. 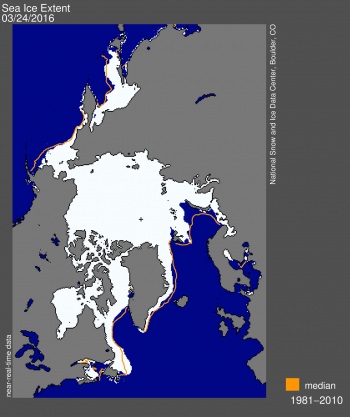 Here’s how much more ice a satellite image showed in late March when the Arctic sea ice extent was at its height. (FILE IMAGE)

Want to know how Arctic sea ice is doing?

For now, you’ll have to take a look outside instead of relying on satellite images of the Arctic sea ice extent from the Colorado-based National Snow and Ice Data Center.

The NSIDC says the sensor on its F-17 satellite has experienced “difficulties,” so it’s temporarily suspended its sea ice series “until further notice.”

That’s all because a channel on the satellite that provides brightness temperatures is providing “spurious data,” the NSIDC said.

The NSIDC said this has resulted in incorrect estimates of sea ice concentration and extent.

The problem was clear in an image produced April 5, when an image showed that there was nearly no Arctic sea ice.

“All data since then are unreliable, so we have chosen to remove all of April from NSIDC’s archive,” the NSIDC said.

The NSIDC said it’s “unknown at this time if or when the problem with F-17 can be fixed” or whether it’s possible to move to a different satellite.

“NSIDC has no firm timeline on when it will be able to resume providing the sea ice time series,” the data centre, which has a satellite record going back 35 years, said.