“We don’t need any government subsidy” 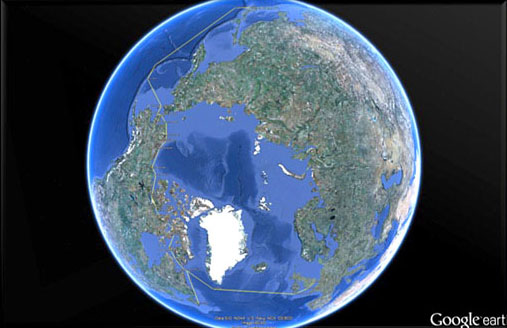 Ontario-based firm Arctic Fibre Inc. has a plan to replace Telesat’s satellite services – which currently carries all of Nunavut’s cell phone and internet services – with a 15,000-kilometre fibre optic cable that would run through the Northwest Passage, connecting Asia to Europe. (GOOGLE EARTH IMAGE) 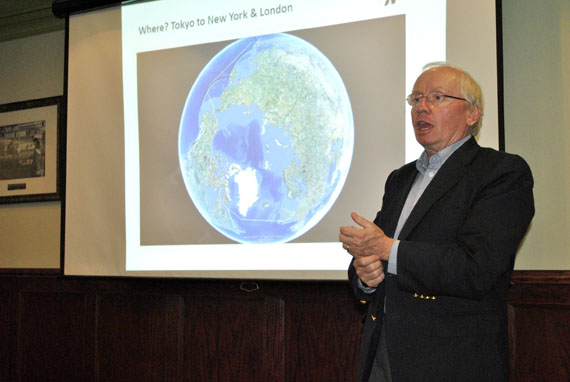 Doug Cunningham of Arctic Fibre Inc. gives a presentation in Iqaluit June 25 at the Hotel Arctic. His company proposes a big bold scheme to connect London, Tokyo and New York with an undersea cable through Canadian Arctic waters, with branch lines supplying fast, cheap telecommunications to most Nunavut communities. If his plan goes ahead, Cunningham foresees a gradual transition away from satellite telecommunications starting between 2014 and 2016. And because internet-hungry subscribers in Korea, Japan, China and Taiwan would cover most of the cable system’s costs, bandwidth prices in Nunavut would fall dramatically over time, Cunningham said. (PHOTO BY JIM BELL)

As Telesat Canada conducts a marketing blitz in Iqaluit this week to tout its fleet of satellites, an Ontario-based firm called Arctic Fibre Inc. is beavering away at a big, bold plan that could one day eliminate northern Canada’s nearly total dependence on expensive satellite bandwidth for internet, voice telephone, television and other services.

“We don’t need any government subsidy. What we ask of the governments at the federal, territorial and local level is just to transition to fibre from satellite over time,” Doug Cunningham, Arctic Fibre’s president, told an audience at Iqaluit’s Hotel Arctic this past June 25.

Cunningham’s sales pitch is simple: to get more and pay less, lay an undersea cable from London to Tokyo — buried beneath the waters of the Canadian Arctic.

And according to him, it’s the solution that Industry Canada is likely to favour in the future for Nunavut and the rest of northern Canada.

That’s because the federal government’s 10-year-old handout system for financing northern broadband internet will end between 2014 and 2016 — when Arctic Fibre’s would start selling cheap, wholesale bandwidth on its fibre optic cable.

“Our discussions with Industry Canada people indicate that the Broadband Canada program is finished and there won’t be any extensions,” Cunningham said.

Arctic Fibre proposes building, by the end of 2014, a $620-million undersea fibre optic cable from London to New York and Tokyo.

The Asia-bound portion of the cable would enter Hudson Strait, then wend its way into Foxe Basin and through the Northwest Passage, past Alaska, into the Pacific Ocean.

Earlier this month, Cunningham visited Singapore to pitch the project at a global conference sponsored by the undersea cable industry.

The Asian telecommunications market is key to the commercial success of the Arctic Fibre proposal.

That’s because much of the global demand for more internet bandwidth is driven by Asia, especially China, where hundreds of million of potential subscribers are ready to sign up for internet and broadband cellular networks that offer G3 and G4 services.

“It is international carriers who are paying the freight here. Our leading tenants will be the Chinese top three telephone companies. Third will be South Korea, then the Japanese and the Taiwanese,” Cunningham said.

This means just a small piece of that fibre optic cable could supply all of northern Canada’s telecommunications needs for decades.

And telecom retailers and consumers in northern Canada would see their bandwidth costs fall dramatically, he said.

For example, a single unit of satellite bandwidth, or “gigabit,” from Telesat Canada can now cost up to $2,500, Cunningham said.

But the price of that same amount of data, carried on a fibre optic cable into Nunavut, would fall from $2,500 to between $100 and $120 within three years, he estimates.

Because of these cost advantages, Cunningham believes Industry Canada will favour his approach over the $200-million public-private partnership that Telesat put forward this past February at the Northern Lights trade show in Ottawa.

“The federal government is looking for every way they can to use technology to drive down costs of services to the public. They are going to say, ‘use this,” because we’re not going to increase your budgets going forward,” Cunningham said.

Cunningham estimates that if those federal subsidies disappear, the price of satellite-based retail offerings could end up rising dramatically.

For example, he estimated that without subsidies, the cost of a Qiniq, or SSI offering that’s now priced at $60 a month could rise to $120 a month or more.

Cunningham cautions that Arctic Fibre would not sell services directly to end users, whether they be government organizations or individual consumers.

The firm, he said, will operate as a “carriers carrier” and not deal directly with consumers.

This means northern service providers such as Northwestel, the SSI Group, Ice Wire, and any other company would be free to purchase low-cost connectivity from Arctic Fibre, then resell it to customers.

And that means passing lower costs onto Nunavut’s long-suffering consumers.

“The prices should come down dramatically. That’s been the case over in Greenland,” Cunningham said.

His Greenland reference is to an undersea cable that Telegreenland laid between Nuuk and a spot near Clarenville, Nfld. more than 10 years ago.

But that cable bypassed Labrador. For that reason, he said the Government of Newfoundland and Labrador strongly supports his proposal.

“Newfoundland? Premier Dunderdale said to me you’re not passing Nain without stopping in this time,” he said.

And the Arctic Fibre proposal has also gained strong support from the governments of the Northwest Territories and from the Kativik Regional Government in Nunavik, which now operates the satellite-based Tamaani system.

“Premier MacLeod of the Northwest Territories, he’s saying you’ve got to get it into Tuktoyaktuk. It’s the same thing for Tamaani, which operates very, very efficiently. They’re worried about the [subsidy] funding. What if it doesn’t get renewed?” Cunningham said.

Cunningham admits that it’s not feasible, financially, to build spur lines that would connect every single Arctic community to Arctic Fibre’s undersea cable.

But 52 per cent of the population would end up connected more or less automatically: Cape Dorset, Hall Beach, Igloolik, Taloyoak, Gjoa Haven, Cambridge Bay and Tuktoyaktuk would lie directly in its path.

The plan also has strong support in Alaska, where the line would connect communities like Shemya, Nome, Kotzebue, Wainwright, Barrow, and Prudhoe Bay.

Iqaluit would be served by an $11-million cable spur from Clarenville, Nfld, which, Cunningham asserts, would dramatically reduce bandwidth costs in Nunavut’s capital.

“Our first megabit from Iqaluit to Newfoundland will cost $11 million. After that, it’s free. But every extra bit you use on Telesat will cost you more,” he said.

And with spur lines built with support from the federal and territorial governments, about 92 per cent of Nunavut’s population could be served by fibre optic, Cunningham said.

At the same time, he said satellite would still play an important role as a back up system, and as a way to serve ultra-remote communities like Grise Fiord that are likely beyond the reach of an undersea cable,

“Do not put all your megabits through one modem. Keep up satellite link in case of a break.”

As for the risk of cable cuts and damage that could be caused by ice movement, Cunningham said that can be reduced by installing shielded cable and the use of horizontal drilling to account for the tidal movement of ice at landing spots.

The Arctic Fibre proposal, however, appears to have won limited support at best from vested interests in Nunavut who have invested heavily in satellite technology.

At Cunningham’s June 25 presentation in Iqaluit, a member of the Nunavut Broadband Development Corp.’s board nearly derailed the gathering with a long, rambling diatribe against Cunningham’s proposal.

A not-for-profit society, the NBDC comprises a collection of for-profit birthright development corporations in Nunavut.

Its Qiniq internet product is operated by the SSI Group, a for-profit Yellowknife-based company that has invested heavily in satellite-based offerings.