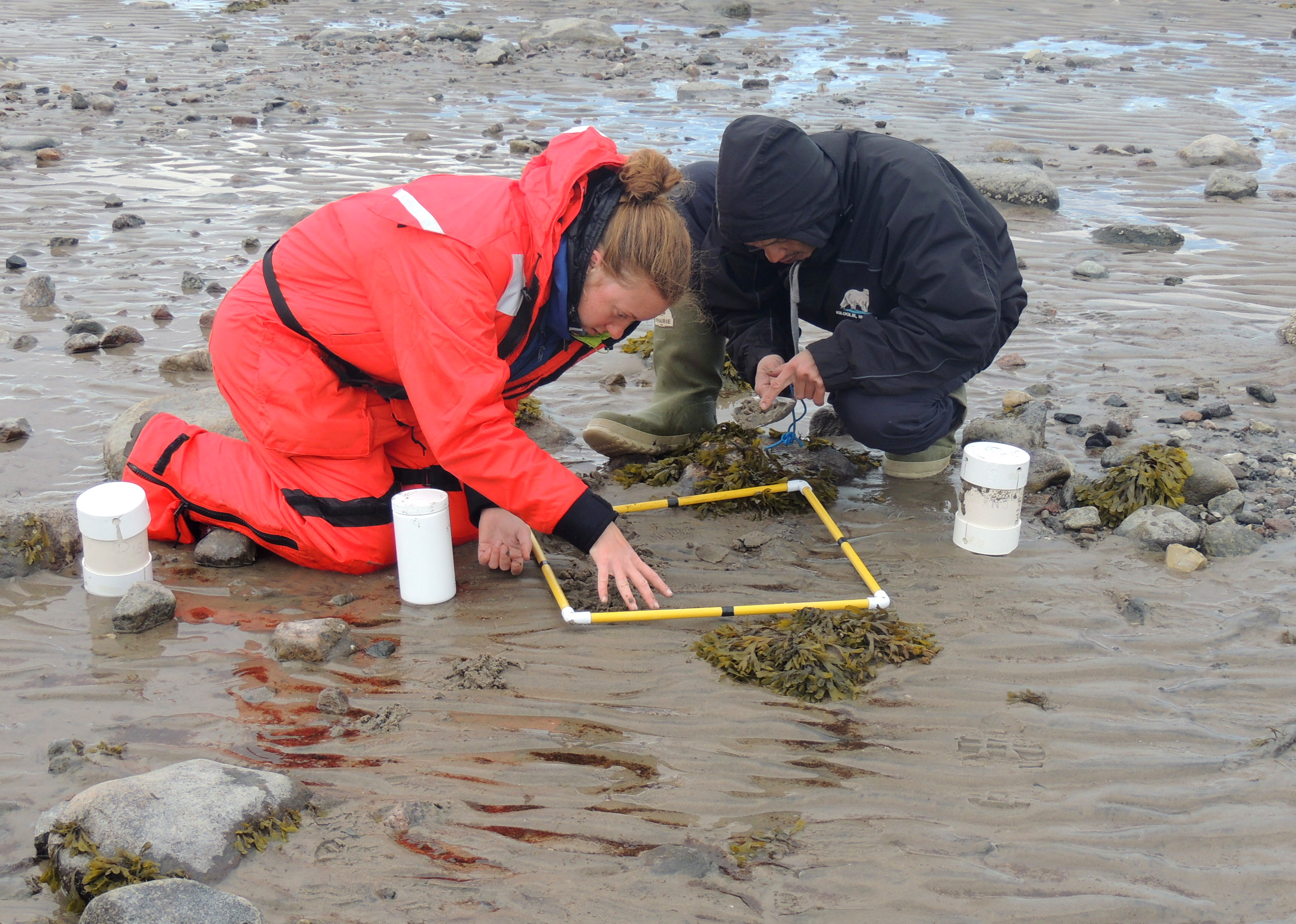 DFO scientist Kristen Adair and Gary Illupaalik, a member of the local field crew, collect invertebrate samples in the mud at low tide in Steensby Inlet in north Baffin. Researchers are concerned about how future shipping traffic to the Mary River iron mine might bring new species into the waters there. (PHOTO COURTESY OF DFO) 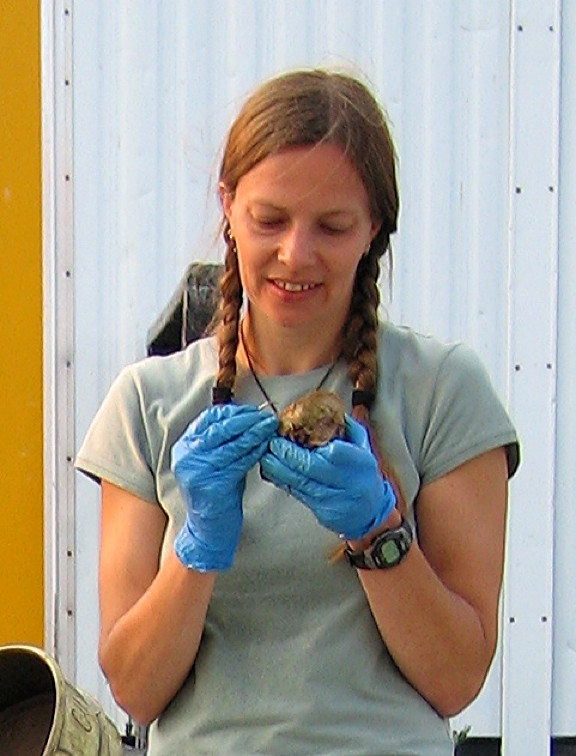 Department of Fisheries and Oceans research scientist Kimberly Howland removes organisms from a rock taken from one of four locations in northern Canada, two in Nunavut, in 2011 and 2012. Researchers with DFO are trying to create an inventory of marine species in order to identify future and potentially harmful, non-indigenous species. (PHOTO COURTESY OF DFO)

When most people think of climate change, they picture polar bears, not zooplankton.

Zooplankton are a huge group of water organisms which range from microscopic crustaceans to jellyfish and live in both fresh and salt water. Just about everything in the ocean eats zooplankton, from tiny fish to huge whales.

In other words, they’re important to the Arctic food chain.

But that food chain is about to change dramatically because of climate change and increased shipping traffic, according to some recent studies.

One such study, of the Norwegian port at Svalbard, published in the August 2013 issue of Diversity and Distributions, suggests that Svalbard’s marine environment is beginning to more closely resemble southern ports, meaning non-indigenous species, or “NIS” from those matching ports will soon be able to survive in Svalbard.

“Over the coming century, sea surface warming at high latitudes is estimated to increase the level of environmental match to nearly one-third of ports previously visited by vessels travelling to Svalbard in 2011,” says the study, entitled “Climate change, non-indigenous species and shipping: assessing the risk of species introduction to a high-Arctic archipelago.”

“In the absence of focused preventative management,” the study says, “the risk of NIS introduction and establishment in Svalbard, and the wider Arctic, will increase over coming decades, prompting a need to respond in policy and action.”

Most zooplankton don’t stray far from home unless they’re transported on the hull of a ship, say, or in its ballast water.

While foreign fishes and crustaceans have been posing serious threats to Canada’s east and west coast ecosystems and in the Great Lakes, few worried about the Arctic since most creatures from away couldn’t survive there.

But the northern climate is getting warmer, there’s less annual ice and more ships are visiting from global ports of call. All this adds up to concerns for scientists who study these things and federal government officials who manage them.

Although the port at Svalbard, an archipelago of islands north of the Norway coast, is near the same latitude as Resolute, the North Atlantic Current moderates temperatures there making Svalbard warmer and keeping the area ice-free and navigable for most of the year.

But still, this study, and others like it, are raising alarm bells at home.

“I think there’s a growing recognition that it’s an important area to look at,” said Kimberly Howland, a research scientist with the Department of Fisheries and Oceans in Winnipeg.

“There are other things associated with increased shipping — accidents and spills — that the government is concerned about it, but in terms of invasive species in the Arctic and how that relates to climate change, I’d say it’s quite a high priority.”

This new, potential threat from non-native species is like a double whammy for Arctic marine animals, says Ladd Johnson who teaches marine ecology at Université Laval in Quebec: Arctic species are already trying to evolve and survive the changing climate conditions and soon they’ll have to compete with bold newcomers.

Whether and how that will impact the fragile northern food chain is hard to say.

For years, academics and researchers have been studying the spread of aquatic creatures around the globe, a process that has been unfolding since human beings built ships and sailed to foreign lands.

It’s why there are now international rules requiring ships to conduct a mid-ocean exchange of ballast water — the water pumped into tanks inside ships to keep them stable at sea.

Ships must discharge, at mid-ocean, the water they took from their home port and take on new water which is meant to exchange potentially invasive coastal creatures in the water for mid-ocean species less likely to survive in a coastal ecosystem.

But those exchanges are never completely thorough and some species can travel on a ship’s hull.

In the Canadian Arctic, the threat of non-indigenous species is still theoretical at this point, says Ladd, because we don’t have a good handle on what’s there now, especially in deep water.

Howland, through her association with the Canadian Aquatic Invasive Species Network, has been trying to compile some of that baseline information.

In 2011 and 2012, she and some colleagues collected under-ice and open-water samples at four major northern ports of call: Churchill, Man., Deception Bay, Que., Iqaluit and Steensby Inlet (Steensby was chosen because of the potential for heavy shipping of iron ore from Baffinland’s Mary River mine).

The inventory is being created to help monitor the future introduction of foreign species into the area.

“Early detection of such species can allow for mitigation before the problem spreads and becomes unmanageable,” the Canadian Aquatic Invasive Species Network report says.

Unfortunately, Ladd said, funding to DFO science has been dramatically cut and these kinds of expensive and time-consuming surveys are rare.

And even if we had a thorough inventory of all the creatures which live in the Arctic waters and then discovered a potentially troublesome new species, we wouldn’t know whether it was because of increased shipping, climate change, or a combination of both.

“Say you’re making your favourite French toast and you decide to put in a little more cinnamon and a little less sugar and someone goes ‘wow, this is really great,’ but you don’t know, is it more cinnamon or less sugar?” Ladd said.

Regardless of the complexity of the work, we still need to be vigilant about monitoring what happens in the North, he said.

“It’s irreversible, that’s why we have to think about it ahead of time,” he said. “Here we have one system where, because of its remoteness and for us, harshness of climate, we have not screwed it up yet. Here’s a chance for us to be a little smarter and wiser.” 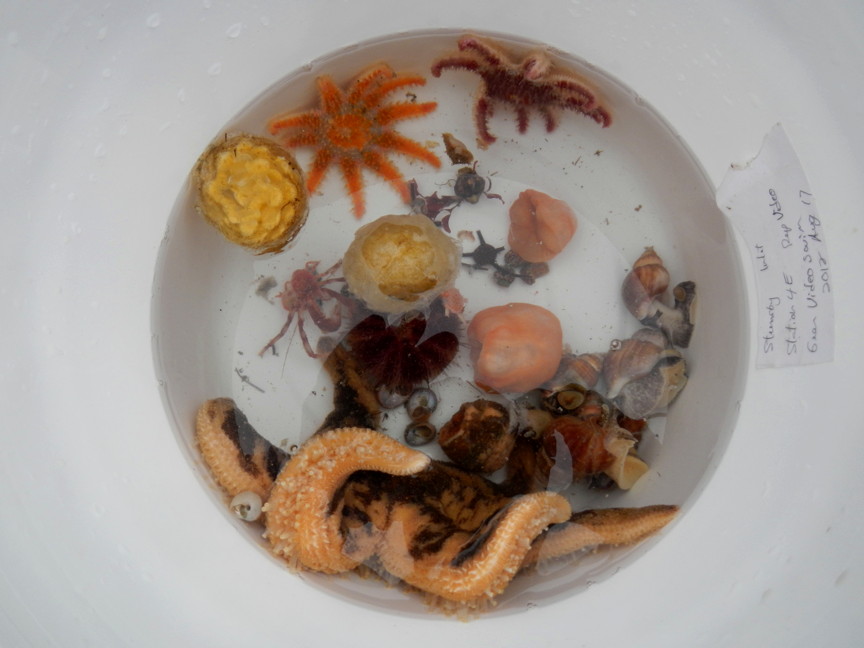 A bowl of creatures gathered from the sea floor of Steensby Inlet in 2012 including sea stars, hermit crabs, sea urchins and anemones. The organisms will form part of a Steensby Inlet marine life inventory which could help identify foreign creatures unwittingly introduced by ships heading for the Mary River iron mine. (PHOTO COURTESY OF DFO)