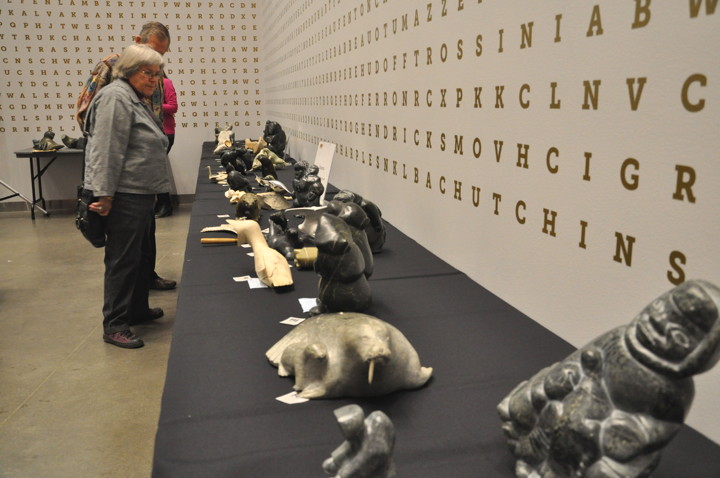 About 100 people attended an Inuit Art Roadshow in Edmonton Feb. 8 at the Art Gallery of Alberta. Long time Inuit art dealer and now semi-retired consultant Nick Lebessis was on hand to give people the news, good and bad, about their artworks. (PHOTO COURTESY ART GALLERY OF ALBERTA) 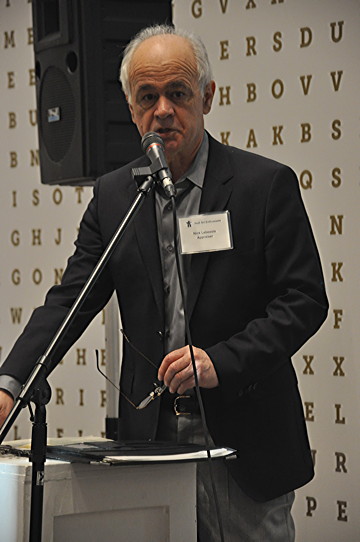 Nick Lebessis spent the first portion of the Inuit Art Roadshow talking to the audience about the history and traditions of Inuit art before looking at individual works of art from the public. (PHOTO COURTESY ART GALLERY OF ALBERTA)

Nick Lebessis says when a sculpture by the late Karoo Ashevak was finally presented to him for appraisal at a recent Inuit Art Roadshow at the Art Gallery of Alberta, he stepped off the podium.

It was a show of reverence, and a sign of humility.

“I said, ‘I’m not worthy to stand next to it,’” Lebessis said from his home in British Columbia, describing the Feb. 8 experience. “Then I told them the reasons why.”

Ashevak died young, he told his audience, at the age of 34 in 1974 and left behind few works, but even in his smallest pieces, he had a rare ability to express the inner life of Inuit — their fears, joys, laughter and pride — unlike many works of Inuit sculpture which reflect the outer world — animals, hunting, drum-dancing.

Once Lebessis had described the Taloyoak artist’s life and history, he took a closer look and offered an appraisal of $37,000, the most valuable piece brought forward that day. But who knows? It could have been worth even more.

This was the second year that the AGA has invited owners of Inuit art to come forward to learn more about the history and value of their collection.

After the success of its Inuit Art Roadshow in 2013, the Edmonton-based gallery, in conjunction with an organization of Inuit art enthusiasts, decided to host the show again, but this time reduced the number of pieces each person could have appraised to three, from five.

For the $10 admission price, members of the public were offered a lecture on Inuit art and culture from Lebessis and then a live appraisal event using the popular Antique Roadshow format.

Art owners could also get a written appraisal of their work for $60 each.

Some of the pieces were mass-produced in the 1970s when demand for Inuit art was peaking, Lebessis said. A piece purchased for $2,500 then might be worth only $1,400 today.

Even worse, he had to break the news to some people that what they had was a plaster sculpture made in China.

Pinning a price on a piece of art is hardly a science. Even after years of immersion in Inuit art, long-standing friendships with artists and a career buying and selling Inuit art around the world, Lebessis still struggles with placing a dollar value on it.

That’s because the value of art fluctuates wildly from person to person, and from era to era.

What is valuable now, may not be later, and what is dismissed today might later be priceless. And something dismissed by a gallery could be precious to the owner.

When asked about whether Canada should institute a system of artist resale royalties — where an artist gets a cut of the price every time the piece is resold by a gallery, or at auction, he said he supports the idea in principle because artists deserve continuous benefits from their work, like an author would from sales of her book.

But practically speaking, it might be difficult to implement.

He said that he’s always had informal agreements with artists and their families. Whenever he resells a piece for a higher than expected price, for instance, he’ll send the artist a cheque. But that’s because he has a relationship with the artist and their families and knows how to reach them.

A royalty system, if not set up properly, could result in money going into the wrong hands or creating a chilling effect on art buying.

“Royalties to the maker? Yes. They’re entitled to it, of course.

“But let’s not look at opportunities to slow down the market with technicalities. Yes, there has to be some continuous benefits to the artist but how do you monitor and implement that? To put a levy on the sale of art, hmmm, people are looking for tax breaks on art in order to support the arts. It might have a negative effect. I don’t know,” he said.

But the world of Inuit art is changing, he added. Inuit artists are increasingly forgoing the middleman and, through the internet and their own marketing, they are becoming entrepreneurs, which means potentially higher profits up front.

Inuit art is still fairly unique in the art world in that artists sell their works in advance to a gallery or store whereas most other artists consign their works to a gallery and if a piece is sold, they pay the gallery a commission and keep the rest, he said. If it’s not sold, the artist takes it back.

And as much as he loves Inuit sculpture and visual arts, he is also encouraged to see the Inuit traditions of storytelling, music and dance reborn in modern performing arts of theatre, rap music and film.

“There were other art forms that were not exploitable at the time, but they existed. So now that there is an economy that allows people to have dance groups and theatres and to make movies, we don’t see a shift in artist expression, we are just witnessing a resurgence of Inuit art and a continuity of Inuit art,” he said.

“When people got together in a tent, in a igloo, they didn’t sculpt sculptures. They gathered together to perform a story, to tell it. And that’s what we are seeing again today.”