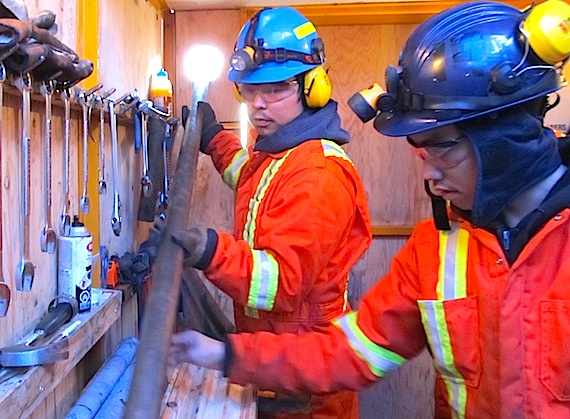 Nearly everyone in Arviat, population 2,500, joined in the celebration as 11 students from Arviat graduated from the community’s first 10-week diamond driller training program.

That’s despite facing fierce weather and polar bears around the drill training site.

“When I passed the drum to a student, it also represented a hand-over to all of them, in terms of working and succeeding in the industry,” said assistant instructor Ludovic Onerk, a certified diamond driller, who has worked on diamond drills for more than 20 years.

To cap off the ceremony, David Gorman, the Northern College campus manager in Kirkland Lake, Ontario, presented the novice diamond drillers with certificates attesting to their newly-acquired skills.

“We have had great support from our partner organizations — this is really a team effort,” said Arviat Mayor Bob Leonard about the program in a Dec. 12 news release.

Partners in the diamond drilling course included Agnico-Eagle Mines, Forage Orbit Garant and Boart Longyear, along with Nunavut Arctic College, Northern College, the hamlet of Arviat, the Government of Nunavut’s Department of Economic Development and Transportation, the Kivalliq Inuit Association, and the federal government’s Aboriginal Skills and Employment Partnership Program.

“There is a big demand for trained drillers in the mining industry and the Hamlet forged a partnership opportunity with Agnico-Eagle, drilling companies, colleges and government funding agencies to develop Nunavut’s first diamond drillers program,” said Graeme Dargo, senior economic development coordinator for Agnico-Eagle Mines Ltd., which owns and operates the Meadowbank gold mine near Baker Lake, where 50 workers from Arviat already work.

“The program provides certification to graduates that is recognized across Canada, and most importantly leads to jobs and income.”

During the program, students and instructors encountered numerous issues that threatened to affect the delivery of the course, noted the news release from John Main, the hamlet’s economic development officer.

These included weather delays, logistical mix-ups, and the migration of polar bears around the drill site, he said.

Despite those difficulties, the graduates acquired all the required skills and knowledge they need to begin work in the drilling industry and they now have “immediate access to well-paying jobs as surface diamond driller helpers,” Main said.

A second diamond-drilling course, which will be open to residents of other Kivalliq communities, is scheduled to start in February, 2012.

The program will continue to be offered at least twice a year, depending on industry demand and funding resources, the news release said.

People in Arviat are hungry for the training programs, Main told Nunatsiaq News earlier this year.

“That hunger comes from an everyday reality for people — poverty, not being able to feed their kids properly, not to be afford a snowmobile. There’s a lot of guys who would like to go forward, but they can’t afford it,” he said. “A lot of people are understanding that training means a better chance for a job.” 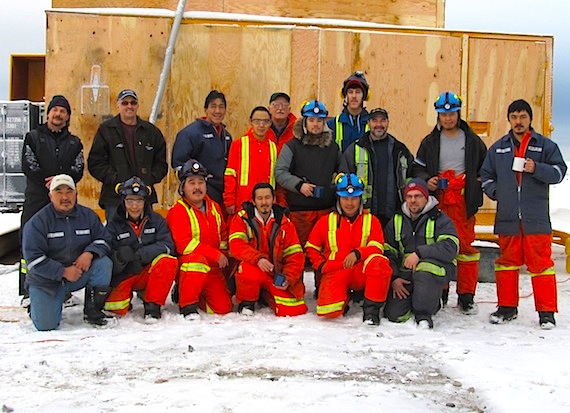 The Arviat Diamond Drillers Training program trainees pose with their instructors and Orbit Garant crew, at the drill site. (PHOTO COURTESY OF THE HAMLET OF ARVIAT)