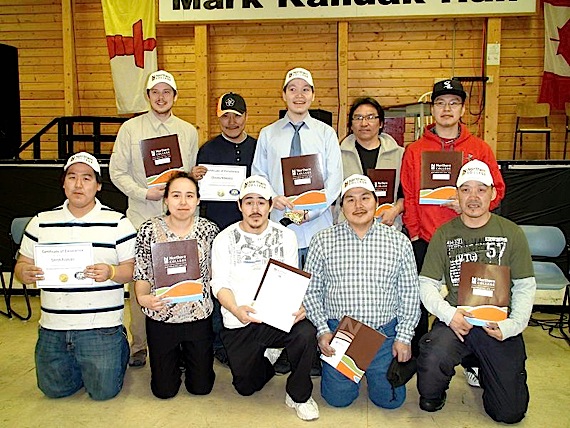 It’s been “a good year for Arviat’s involvement in the mining industry,” said Arviat mayor Bob Leonard in an April 17 news release.

“With the completion of this course, we now have 21 trained driller’s helpers in Nunavut that we did not have a year ago — 18 of them from Arviat,” he said.

Organizations including the hamlet of Arviat, Agnico-Eagle Mining Ltd., Nunavut Arctic College and the Government of Nunavut teamed up to fund the 10-week course, which provides certification that’s recognized across Canada.

The program’s second graduating class also included students from outside the community, including its first female graduate, Miranda Uqayittaq of Baker Lake.

“We achieved our goal of providing people with the training needed to be successful in the mining industry,” Leonard said. “Several graduates have already been invited by our drilling company partners to interview for jobs.”

As of April 17, three graduates had been invited to interview for positions with drilling contractor Boart Longyear, while another two have been offered jobs with Forage Orbit-Garant Drilling.

The drilling program, which offers both classroom and practical components on an operating diamond drilling rig in Arviat, launched in the fall of 2011, in response to a demand for trained local driller in the Kivalliq region’s booming mining industry.

People in Arviat came out to celebrate at an April 13 graduation ceremony held at Mark Kalluak Community Hall, where local MLA Dan Shewchuck and officials from Agnico-Eagle handed out graduation certificates.

“The hamlet of Arviat wants to ensure that local Inuit can benefit from Agnico-Eagle’s activities in the Kivalliq, and their approach is to develop community-driven training programs that prepare people for employment opportunities,” said Agnico-Eagle’s Graeme Dargo. “There is a demand for trained drillers in the mining industry.”

About 60 Arviat residents are already employed by the mining company, which owns and operates the Meadowbank gold mine near Baker Lake.