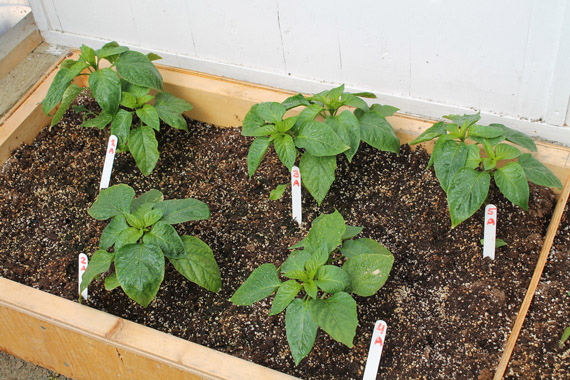 These bell peppers growing in Arviat’s greenhouse have been labeled for monitoring purposes. (PHOTO COURTESY OF SHIRIN NUESSLEIN) 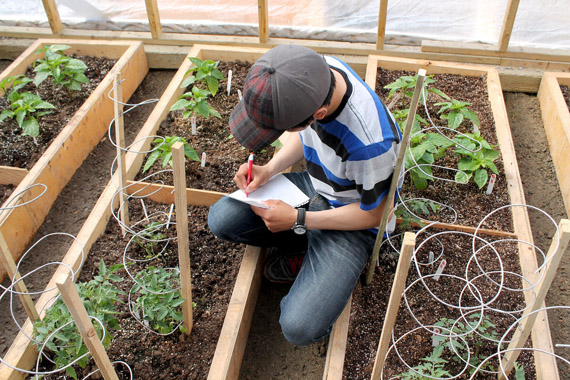 Arviat’s new greenhouse project produced its first lettuce harvest earlier this month, but the produce went to an unlikely group.

Dozens of school-age children attending a local camp got the first taste of locally-grown salad, and the lettuce was gone by the end of the lunch hour.

While kids aren’t usually the biggest fans of lettuce, Shirley Tagalik said they enjoyed it because, “it’s lettuce that actually tastes like something,” she said.

Tagalik, who sits on Arviat’s health and wellness committee, is helping oversee the community’s greenhouse project in its first year of operation.

In a small glass structure set up outside Arviat’s John Arnalukjuak high school, peppers and tomatoes planted just over a month ago are already coming to life.

In line with Arviat’s health and wellness committee’s efforts to fight local food insecurity, the greenhouse’s long-term goal is to feed the community.

But this summer, its coordinators first want to see how viable it is to grow produce at all.

“We looked at the potential of harvesting crops off the land and also the potential of a small grow operations, but one of the biggest obstacles we had was the local soil lacks nutrients,” Tagalik said. “It’s easy enough to stick some seeds into the soil, but getting that soil is a challenge.”

So this summer’s greenhouse coordinator, Shirin Nuesslein, and a group of local youth assistants, have planted a handful of crops in three types of earth: local soil, local fertilized soil and commercial soil that’s been brought into the community.

It’s too soon to tell which soil the plants thrive in most, but “One thing is for sure,” Nuesslein said, “the plants are growing very well.”

One of her assistants, 15-year-old Megan Gavin, has spent the last month monitoring plant growth in the greenhouse, checking the humidity and temperature of the space and measuring the plants and their leaves.

The high school student said it was her mother that sparked her own interest in gardening since she was young by keeping so many plants at home.

“I most enjoy seeing the plants grow,” she said. “It’s new for me to see (produce) growing in my community. I would definitely tell people who are interested to come and try it.”

And that’s how the project is gaining popularity in Arviat; people walking by the greenhouse often stop and ask what the team is working on, or if they can have a peek inside.

The community has already had a hand in helping the greenhouse’s operation. Its local soil is the product of composting efforts: students in the Arviat’s school operate worm farms in their classrooms, while Arviammiut are also invited to bring to their food waste to drop off in large composting barrels.

To fertilize that soil, the greenhouse team has harvested seaweed from Hudson Bay, which is then de-salted and mulched before it can be added to the soil.

Another process the team hopes to try out — picked up from a community garden in the Northwest Territories – is mounding the soil over a source of protein, like a caribou stomach, which releases nutrients as it decomposes.

That’s in line with the newly-launched Nunavut Food Security and Action Plan, which actually tasks Arviat’s wellness centre to look to food production in other Arctic regions to see what can be used in Nunavut.

At the end of this year’s harvest, greenhouse staff will review their findings and decide how to move forward.

“If we can get some good answers to the soil dilemma, it makes it perfectly viable to plant some vegetables at home,” Tagalik said.

And that’s one more way to ensure food security in this community of about 2,300, which is home to Nunavut’s youngest population.

A nutritional profile on children aged six to 12, carried out a few years ago found that Arviat children were eating country food just once a week.

Their other sources of protein were processed foods like hot dog and canned meat, Tagalik noted.

“In a population that used to rely entirely on protein are hardly getting any at all,” she said. “Similarly, they’re only getting a serving of fruits or vegetables once or twice a week.”

Some of its other efforts include making a yogurt-type product with skimmed milk, as well as a young harvester program that pairs young people with elders to learn about hunting. 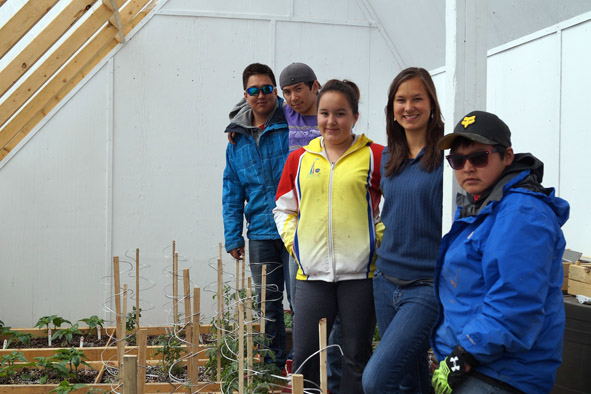