“Arviat’s always been a media-savvy community” 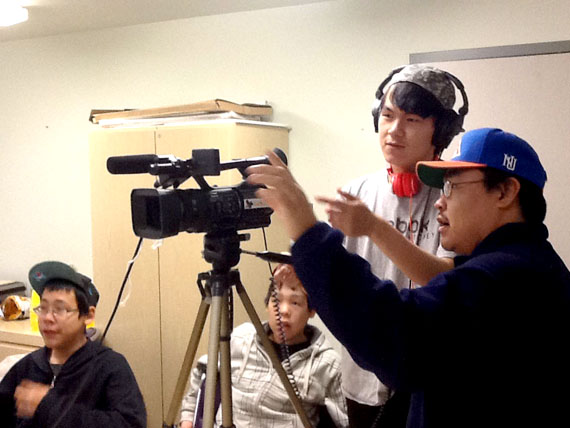 Eric Anoee Jr. shows Innosar Issakiark some tips for recording. They were interviewing youth on their perspectives on bullying during one of many evening workshops. (PHOTO COURTESY ARVIAT FILM SOCIETY) 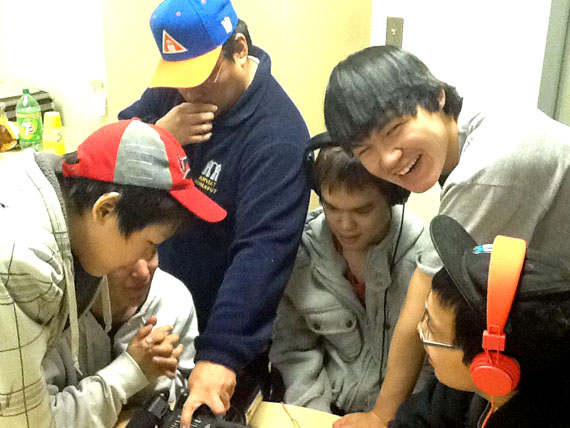 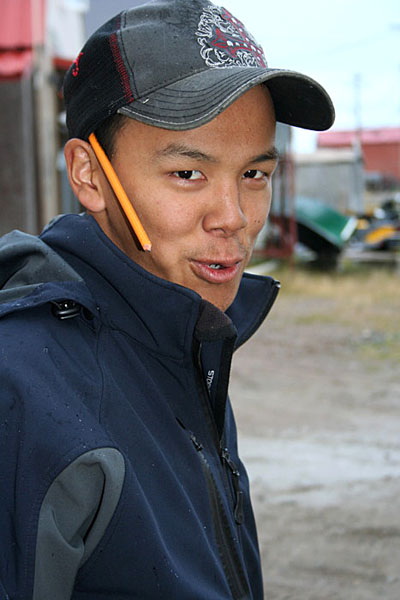 Even during blizzards and on Saturday nights, the youth members of the Arviat Film Society turn up at meetings, ready to discuss future plans.

The film society was created a few years ago after interest was generated in the community with the launch of the Nanisiniq project, in which five youth documented Inuit history by talking to elders.

Eric Anoee Jr., the president of the society says the group of 18 Arviat youth produced most of the content in Inuktitut. “Our goal has been to promote filmmaking in Arviat and we have been actively supported by the community.”

Anoee has been involved with the society since it started two years ago.

Since then, many youth have become interested in joining.

And now the group has reached a milestone — they had their first broadcast in the community on the Padlei Co-Op channel in the beginning of December.

The youth decided to show old footage from past Arviat Christmas concerts and plays, and content from the Nanisiniq project.

A member of that project, Curtis Konek, a Grade 12 student at Arnalukjuaq High School, was honoured this past October for his work.

Feedback from the public was good after the first co-op broadcast.

“People were saying I wasn’t finished watching it, I wonder if they will play it again,” Anoee said.

A lot of the youth, all from Arviat, are still in high school, and are set to graduate in the spring.

Anoee says this makes him “delighted and proud” that they will be leaving school with hands-on media skills.

“[You would] grab a camera and learn to make a film, we have been very successful in getting membership from youth,” he said.

The project began with only a few cameras, tripods and basic editing software.

At workshops, “a whole bunch of them show up and they don’t want to stop,” Anoee said. “They will take over the film society in the future, we are confident of that.”

The group gets money and equipment from the hamlet, the school and the government. Often, group meetings will take place at the school, the college, the hamlet or the visitor’s centre.

During those weekly meetings, the society members plan short videos, some on sewing and other traditional activities.

But the Arviat Film Society doesn’t shy away from addressing social issues.

At one of the weekly meetings, one of the group members said they should focus on anti-bullying or anti-suicide videos.

“That was very deep. We didn’t expect that,” Anoee said.

The kids talked about their past experiences with bullying and “it’s very prevalent everywhere and it’s a big thing here too,” he said.

And some more reserved youth have become more confident and aren’t afraid of getting behind the camera.

“We were listening to them speak from their heart about their experiences of being bullied,” Anoee said.

Jordan Konek, vice-president of the society, says the group’s current work is “only the beginning.”

“Nunavut is a growing community, and all these people are going to start coming to Nunavut, and these productions that we are doing could result in more jobs,” he said.

Konek, 24, who is also a member of the Nanisiniq group, says the society’s films could be used for archival videos in the future. “It’s going to help people in Arviat,” he said.

“We had some videos that we wanted to show to [Arviat] and we thought maybe through the co-op we could get a channel. After about two years of trying to get attention, we finally got it,” he said.

A lot of what the society does is for young people to have something to do, he said.

“We have done some interviews in the past, we will eventually find a way to come up with these new videos for the future.”

And each time a person uses a camera or does some editing, they learn something new, Konek said.

One of the biggest goals of the Arviat Film Society is that Arviat will see the group’s work and be proud of it.

“Knowing that it’s going to be shown on the co-op channel, it gives them a lot of pride,” Anoee said.

The society is truly a community effort, said another volunteer, Jamie Bell.

“Arviat’s always been a media-savvy community,” he said.

“You could hear a pin drop in the room while talking with some of the elders about some of the traditional knowledge stuff and some of the oral histories that they are collecting in the community.”

Bell said that a lot of parents and educators “really wanted to take what Nanisiniq was doing and make sure that that would grow, they didn’t want it to end.”

However, he acknowledged that a lack of bandwidth in Nunavut does limit the group in what they can broadcast or stream online.

But “with the co-op stepping up it kind of completes the puzzle,” Anoee said.

People can get in touch with the group on their Facebook page, Arviat Film Society, or their YouTube channel, ArviatTV.