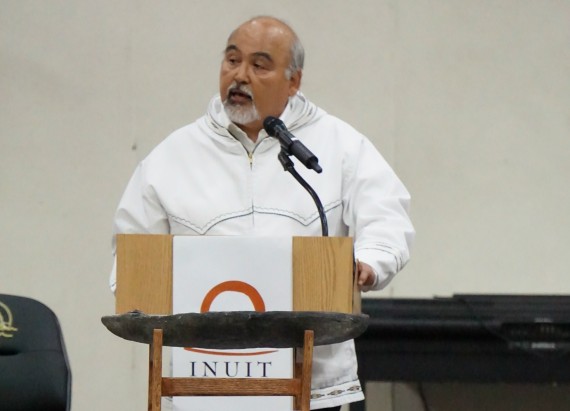 Standing in the gymnasium on a school built with oil money, in city with public services funded by oil and with homes that are heated by natural gas that is a byproduct of oil development, the chief executive of the world’s richest Indigenous organizations on Wednesday, July 18, gave a full-throated endorsement of Arctic oil development.

“You see, our region is dependent upon the economy that oil and gas development brings,” Rex Rock, CEO of the Arctic Slope Regional Corp., said in a speech at the Inuit Circumpolar Council’s general assembly, held last week in the northernmost U.S. community, Utqiagvik, Alaska.

The assembly, convened every four years, draws attendees from around the Inuit regions of the world—Alaska, Canada, Greenland and Russia. Nearly 1,000 have converged on Utqiagvik, site of the 2018 assembly, where the theme is “The Arctic We Want.”

In his speech, part of a session on economic issues, Rock explained what the Inuipiat people of Alaska want from oil development.

It is “no secret” that the Arctic Slope Regional Corp., based in Utqiagvik and owned by the Inupiat people of the North Slope, supports oil development in the region, he said. But that development, now “thriving” because of new discoveries, new technologies and new exploration opportunities like the just-opened Arctic National Wildlife Refuge, must be on Inupiat terms, he said.

“We want an equity share of projects that are developed in our region,” he said.

Such participation can be complicated, he admitted.

“Is there a risk in us partnering? You bet. But it gives us skin in the game. Does that change our viewpoint? You bet. We have to be diligent and work with developers, explorers and agencies on the best path forward. Will this be easy? No way. There will be things that don’t go right. There is no perfect path, but we have to continue to try,” he said. “By having a seat at the table during the decision process, we will have the opportunity to influence projects for protection of our rights as indigenous people.”

ASRC, which has oil interests ranging from mineral rights below the ground to support services above it, has been open about its advocacy of continued oil development, both onshore and offshore, Rock said. He confessed to some reservations about the latter. “I’m a whaling captain first. And as a whaling captain, the evolution from onshore oil exploration and production to offshore raises concerns for me and other North Slope captains.”

In a keynote address that focused on environmental issues, Mary Simon, a former ICC president, cited Arctic shipping as one opportunity.

“As the ice melts, the ships are coming. If it’s not oil and gas exploration, it’s for commercial shipping and tourism. More and more larger and larger ships are coming, and more and more smaller vessels are coming each year,” said Simon, who spoke by Skype from her home of Nunavik in Arctic Quebec.

In addressing environmental threats posed by more shipping, Arctic people could help themselves economically, Simon said. She called for more planning “so when that increased shipping comes to the Arctic are we prepared to meet the inevitable spills and take advantage of the jobs and training opportunities.”

Charlie Watt Sr., president of the Makivik Corporation of northern Quebec and a former Canadian senator, spoke about opportunities in renewable energy. In addition to reducing living costs and improving quality of life in the Arctic, development of renewable energy can attract new business, Watt said in a speech. He cited mining companies that are now more interested in operating in Nunavik. “We are investing in renewable energy because it has tremendous spinoffs for our region,” he said.

At a time of increasing international aggression and protectionism, the Inuit can go in the opposite direction, he said. His suggestion: “The creation of Inuit free trade across the Inuit homeland.”