At long last, Iqaluit councillors agree on a tax increase 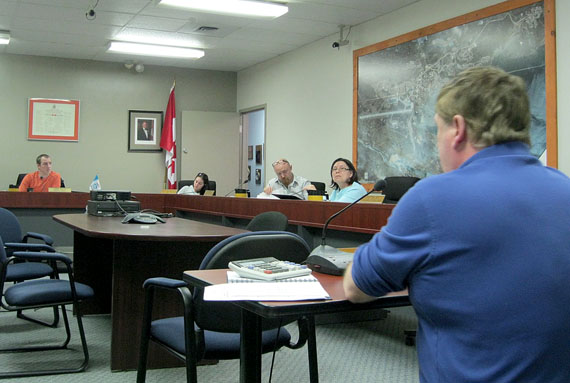 Iqaluit’s finance committee listens March 3 to the city’s chief administrative officer, as he summarizes changes made to the city’s 2014 draft budget over the past two months. (PHOTO BY PETER VARGA)

Iqaluit city council agreed March 3 to reduce the city’s property tax hike for 2014 even further after a second month of deliberation on this year’s budget.

Council’s finance committee of the whole settled on a mill rate increase of one — or $1 on each $1,000 of assessed value — on all properties in the city.

The increase is 0.5 less than what the committee agreed to Feb. 4, and one-third the amount administration proposed in the first draft of the budget, tabled Jan. 9.

The finance committee first decided on a 1.5 mill increase in property taxes last month with some dissent from two councillors.

The two dissenters, Coun. Kenny Bell and Coun. Noah Papatsie, were joined by a third, Coun. Terry Dobbin, at a regular meeting Feb. 25 — which sent the draft budget back to the drawing board.

Day 7 of budget discussions by the finance committee went more smoothly, as councillors noted they had logged more than 30 hours of discussion and deliberation on budget drafts since Jan. 9.

Councillors settled most of their questions about the budget when John Hussey, chief administrative officer for the city, gave line-by-line explanation by of all changes councillors ordered to budget drafts over the past two months.

The proposal to set the property tax increase to one mill, instead of the 1.5 mill increase first agreed to on Feb. 4, came from Dobbin.

All rate changes, with the final draft of the budget, will go to the next regular council meeting for final approval.

The committee agreed to recommend the draft for approval even though it would not be printed until later in the week. Hussey promised administration would have the final draft ready for councillors on March 6, at earliest.

Only Coun. Mary Wilman abstained from the vote, explaining she could not recommend a draft that she could not see in print, complete with figures.

“I don’t know the calculated amounts,” she said.

Councillors agreed almost unanimously on all rate changes. Only Coun. Joanasie Akumalik opposed the motion on the increase to garbage collection fees.

Coun. Simon Nattaq did not attend.

The chief administrative officer waved off a suggestion that administration should identify where the cuts should be made.

Administration had already identified many possible cuts over the past two months, in consultation with all of the city’s departments, he said.

“At the end of the day, it’s your budget,” Hussey told councillors. “If you think we’ve got money in the wrong places, and can reduce it, tell us (administration), and I’ll make the recommended reductions.”

After some discussion of cuts to reserve funds, salaries, and equipment, councillors decided to put off the purchase of a new dump truck for public works.

The truck’s value of $184,900 “is just about equal” to the 0.5 mill rate the committee was looking to cut, Hussey told councillors.

Plans called for the purchase of a new truck to replace an older one. The city bought a new dump truck for the department in 2013, Hussey said, adding that the department could still make use of the old model for the remainder of 2014, before it is replaced.

Bell headed up the meeting as vice-chair of the finance committee, following Stevenson’s resignation as chair in the committee’s last meeting, Feb. 25.