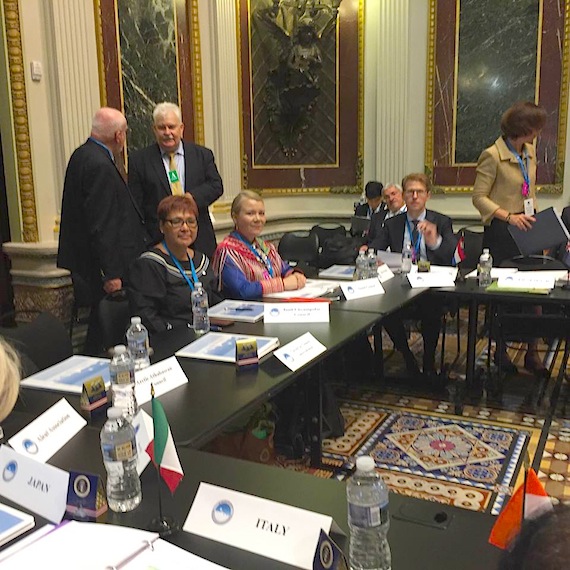 Ministers from 25 governments and Arctic Indigenous groups called for more international collaboration and the inclusion of Arctic Indigenous peoples in science and research decision-making in the Arctic at a major science meeting held Sept. 28 in Washington, D.C.

“Arctic science, in concert with traditional Indigenous knowledge, can help us address the effects of climate change and other challenges that Arctic communities face today,” said Kirsty Duncan, Canada’s science minister, in a Sept. 28 news release on the ministerial meeting.

Duncan said Canada recognizes the importance of collaborating with Indigenous peoples and other Arctic nations “to develop solutions together.”

Canada plans to address coping with environmental change by looking at case studies on capacity building and partnership development with “Big Science,” a fact sheet on the ministerial said.

At the meeting, Duncan also spoke about using Arctic science to inspire the next generation of young scientists and encourage young people in Arctic communities to pursue science, technology, engineering and mathematics.

That’s also the aim of the Science Technology, Engineering, and Mathematics—STEM—commitment made by ministers Sept. 28, part of the ministers’ joint statement issued after their meeting in which they recognized “the importance of traditional and local knowledge and the sharing of scientific and technological information to advance well-informed, timely, and constructive decision-making.”

“Scientists live and breathe their research every day. Inuit live and breathe our Arctic homeland every day—we continue to be the people ‘on the ground’ year round. Together, through an equitable partnership, building on our collective strengths, we will fill our blind spots with knowledge much more efficiently than we can today,” the Inuit Circumpolar Council’s president, Okalik Eegeesiak, who attended the science meeting, said in a Sept. 29 news release.

The science meeting came less than a week before the Arctic Council’s Senior Arctic Officials and Indigenous Permanent Participant organizations, such as ICC, are set to meet in Portland, Maine, to discuss environmental issues and promote sustainable development in the Arctic.

On the agenda for discussion, according to a Sept. 29 Arctic Council release—climate change and resilience, black carbon and methane, long-term strategic planning for the council, oil pollution prevention and response, and scientific co-operation, among other issues of concern to the council and the Arctic region.

The U.S. currently holds the rotating chairmanship of the Arctic Council, which was passed on from Canada in Iqaluit in April 2015.

The Portland meeting will also see delegates to discuss the proposed program for the Arctic Council’s chairmanship of Finland from 2017 to 2019.