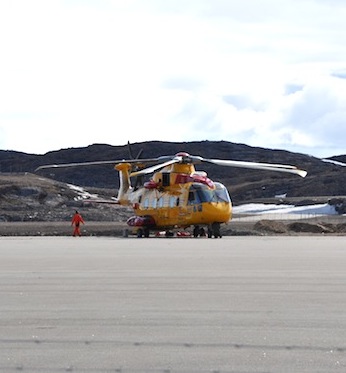 This Cormorant helicopter at the Iqaluit airport joined a Hercules over the area where three seal hunters from Salluit went missing in June, 2011. (FILE PHOTO)

These Hercules C-130 aircraft, parked near the runway of the Iqaluit airport in 2009, took part in a massive search of the Ungava area of Nunavik. (FILE PHOTO)

Search and rescue aircraft, personnel and mission-management must be improved to keep the national search and rescue system at current standards for the coming years, the Auditor General of Canada said in his spring report, released April 30.

But “significant improvements are needed if they are to continue to adequately respond and provide the necessary personnel, equipment, and information systems to deliver SAR activities effectively,” he said.

Search and rescue operations in Canada’s North are conducted first by local authorities, such as the RCMP, Canadian Rangers, and volunteers.

And, if more assistance is needed, federal authorities with greater resources — the military and the Coast Guard — are called upon, with the Air Force as the lead agency for calls on land.

Nunavut and Nunavik are served by two different search and rescue regions, known as SSRs, one based in Trenton, Ont. and Winnipeg, and the other in Halifax, which serves southern Baffin Island.

From these bases, Hercules aircraft, which are more than 20 years old, respond to calls in the North.

And, according to Ferguson’s report, these aging Hercules lack modern equipment and take longer to service due to shortages in spare parts.

Of the 13 in service for search and rescue, two at a time are in maintenance, which leaves 11 available for service.

As well, the Griffon and Cormorant helicopters now in use are in too short supply to cover operations for the coming years, with the Cormorants in need of upgrades to be better suited to the North, Ferguson said.

“Consequently, the Air Force has little flexibility to meet operational demand and must from time to time call upon other aircraft,” his report states.

In the report, the Department of National Defence said it’s in agreement with the auditor’s recommendation that it acquire new aircraft “best suited for search and rescue activities.” A contract for new aircraft to replace the Hercules aircraft will be awarded in 2014-2015.

Ferguson also makes repeated reference to shortfalls in staffing in federal search and rescue personnel, for both the Air Force and the Coast Guard.

The Air Force, he notes, is short on qualified pilots and flight engineers. Personnel training must improve, with regular updates.

But this has become more challenging due to lack of aircraft to train new recruits, the report states.

“Without an adequate number of available personnel, coverage around the clock is achieved at the expense of training new recruits, professional development of SAR personnel, and leave,” the report said.

On top of a lack of staff to carry out search and rescue, the Search and Rescue Mission Management System is stretched to its limit and due for an upgrade.

In the report, DND says “a new, integrated” management system was approved late last year, and that, along with the Department of Fisheries and Oceans, DND has stop-gap solutions in place until the new system goes online.