“Mr. McDonald regrets he was not familiar with the local laws” 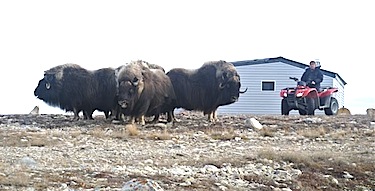 The passengers on board the Fortus are “wrangling’ the muskox on a quadbike” during their September stop in Cambridge Bay. (PHOTO FROM TRACKINGFORTUS.COM)

Sources in Cambridge Bay had alleged that a $10,000 cheque left to cover two $5,000 fines imposed for those offenses had bounced.

On Oct. 3 Cambridge Bay’s senior administrative officer, Stephen King, said in an email to Nunatsiaq News that “the fines have not been paid as of today,” but that McDonald had not issued a cheque that bounced.

“Paul McDonald has all the information he requires to wire transfer the $10,000. They had said they were going to make a payment via wire the day they left Cambridge Bay, but that hasn’t happened,” King said.

McDonald said he will make a full payment before Nov. 15, when he was slated to return to Cambridge Bay to appear in court on the two charges.

In a statement issued through lawyers, McDonald expressed his ”regret” for the firework and liquor infringements, but he said that a cheque for $10,000 did not bounce, The Australian reports.

”Mr McDonald regrets he was not familiar with the local laws or the restriction on fireworks or liquor at the time of the alleged incident. Mr McDonald confirms fines were issued for possession of illegal fireworks and alcohol and are due for payment by 15 November 2012. Mr McDonald expressly denies providing a cheque for $10,000 that has bounced,” said the statement from Brisbane-based Praeger Ellem Solicitors, reported on in the newspaper.

“Mr McDonald has not yet made payment of the fines due for payment by 15 November 2012. Mr McDonald confirms that payment of the fines will be made in full by the due date for payment in satisfaction of his obligations. Further, on receipt of payment in full by the Royal Canadian Mounted Police he will not be required to return to face any further proceedings in relation to those fines.

”All other allegations are expressly denied. Mr McDonald has instructed his lawyers to consider action against any false allegations that may impact on his reputation.’’

After jet-skiing on the ice in the Northwest Passage, the boatload of Australian party-makers arrived in Cambridge Bay early in September on the Fortrus, a 34-metre luxury yacht from Australia, which sleeps 12 in cabins with ensuite bathrooms and entertainment systems.

That resulted in police seizing 200 bottles of alcohol (which The Australian pointed out included mainly Australian wines) and $15,000 worth of illegal fireworks Sept. 7 from the Fortrus.

McDonald appears to have deep pockets.

The Courier Mail reported in 2011 that he made a deal to sell his Sunshine Quarries business for $81.5 million.