Autumn storm keeps most Iqaluit residents at home, in the dark

City of Iqaluit shuts down for the remainder of Oct. 8 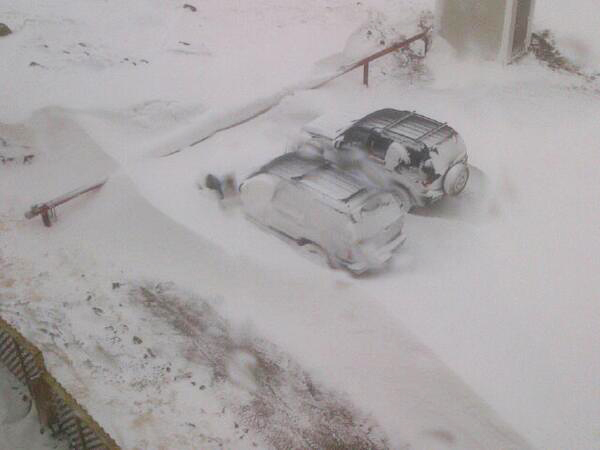 Two cars get buried under a snowdrift in Iqaluit, which is expected to get between 10 to 20 centimetres of snow today, with winds gusting up to 100 km/h. (PHOTO BY KENNY BELL)

The City of Iqaluit announced early in the afternoon of Oct. 8 that city crews and heavy equipment were off the roads due to the bad weather.

City officials said water and sewer trucks were also off the road — and they urged residents to conserve water by taking smaller baths and shorter showers, by doing smaller laundry loads and by not using dishwashers.

Fire and ambulance services planned to continue operations, but all city offices remained closed until further notice. Drivers were advised to be cautious while on the roads.

Iqaluit residents woke up to winds gusting to between 90 and 100 kilometres per hour Oct. 8.

The storm had started sweeping through the region during the late evening of Oct. 7, buffeting communities throughout the lower part of Baffin Island.

That was expected to continue through the evening of Oct. 8, with winds of at least 50 to 70 km/h lasting until Oct. 9, according to Environment Canada’s website.

The storm knocked out electrical power in Iqaluit many times, starting in the early morning hours of Oct. 8 — with some Iqaluit residents reporting at least eight separate outages.

At the same time, cell phone, internet and landline phone services were also knocked out periodically.

In tweets, the Qulliq Energy Corp said the outages were caused by a combination of wind and ice on power lines, which prevented the QEC from rotating power.

“This is essentially a really strong low pressure system affecting the lower half of the Baffin region,” said Environment Canada meteorologist Dale Marciski.

“We recorded gusts a little over 100 kilometres an hour at the Iqaluit airport this morning — so this is very, very strong.”

Wind gusts of up to 110 km/h were recorded in Pangnirtung, a community that gets down-slope winds because of its mountainous geography, Marciski added.

At the same time, municipal work crews sanded and plowed many streets, as many vehicles, including taxis, were on the roads.

But otherwise, the streets of Iqaluit were largely empty and many government office buildings were filled with empty cubicles as workers stayed home.

The community’s schools shut down for the day, along with most daycares and a number of businesses. The Arctic Ventures and Northmart retail stores opened between power failures.

The RCMP did not report any major incidents or traffic accidents in Iqaluit Oct. 8, although some residents reported construction materials and debris blowing through the streets, including a large red tin roof that appeared to dislodge from a property overnight in the Plateau neighbourhood.

The GN has yet to reveal its updated blizzard policy following a big storm last spring, when the GN decided its Iqaluit office would remain open.

That was despite an advisory from the city asking people and vehicles to stay off the roads, due to a large number of stalled vehicles in the streets.

But Environment Canada says the worst of the storm will subside by late afternoon, as it continues to travel in a northeasterly direction.

Snow was expected to continue throughout the day of Oct. 8, dumping another 10 to 20 centimetres on the region before nightfall.

Winds were also expected to taper off during the evening, although these were predicted to pick up again after midnight.

And despite the more than 100 km/h winds recorded in the region today, that was no record.

Winds gusting to 137 km/hr were recorded at the Iqaluit airport Oct. 12, 1987, according to Environment Canada records.

The all-time highest wind speed in the region was recorded in March, 1960, when 156 km/h winds blew through Iqaluit.