Award-winning Osmos app to be launched in the Inuit language 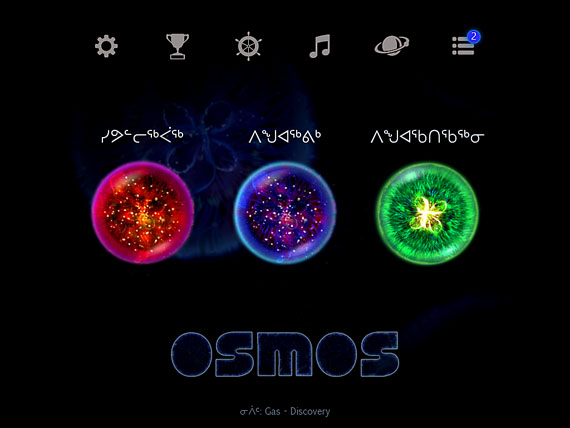 The main menu of the Inuit language version of Osmos, developed by Pinnguaq of Pangnirtung in cooperation with Hemisphere Games. (IMAGE COURTESY OF PINNGUAQ)

Gamers who want to enjoy the award-winning Osmos app in the Inuit language will get their wish June 21, when the Pinnguaq development group of Pangnirtung will release an Inuktitut version of the game online at the Apple app store.

Osmos, developed by Hemisphere Games of Toronto and Vancouver, won Apple’s iPad game of the year award in 2010, along with numerous other honours.

The object of the game is to propel a “mote,” a kind of single-celled organism, into smaller motes so they can be absorbed. The game is over when a player’s mote is absorbed by a larger one.

Now, it’s the first major digital game to be interpreted and released in the Inuit language. (See video embedded below.)

Pinnguaq said they used a crowd-sourcing technique that brought together more than 100 people to produce Inuit language terms for use in their Inuktitut version of the game.

To do this, they used an online quiz that invited people to submit interpretations of 15 random terms.

“People from every community in Nunavut participated providing an authentically “made in Nunavut” feel to the translation,” Pinnguaq said in a news release.

Ryan Oliver of Pinnguaq said the game’s release gives Nunavummiut a foothold in the Canadian video gaming industry, which contributes $2.3 billion a year to the national economy.

“By bringing quality, award winning games like Osmos to an Inuktitut speaking audience we’re hoping to show Inuit have a voice and are welcome in this industry,” Oliver said.

The Inuktitut version of Osmos will work on iOS devices like the iPad, iPhone and iPod touch.