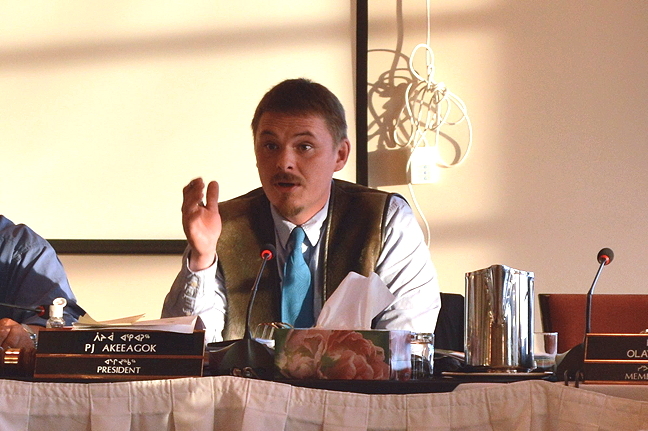 The Qikiqtani Inuit Association has reported another strong surplus for its 40th anniversary as the birthright organization reaps the benefits of the Mary River Inuit impact and benefit agreement for another year.

According to the yearly fiscal report presented Oct. 6 to QIA board members at their annual general meeting in Iqaluit, the organization will show a surplus of more than $5.5 million in 2015.

This is a decrease of more than 70 per cent from last year’s surplus of $18.7 million, however the record-setting gain of 2014 was due to a one-time $20-million payout from Baffinland Iron Mines Corp. in the initial phase of the QIA’s IIBA agreement for the Mary River iron mine.

“We’re probably one of the healthiest organizations in terms of surplus and where we fund our priorities,” QIA President PJ Akeeagok told Nunatsiaq News.

“I’m ecstatic, happy, it’s definitely something to be proud about in terms of how solid the organization is.”

Nearly half of the Inuit organization’s surplus for this year can be traced to an increase in land leases and fees collected by the QIA which doubled this year: $5.01 million in 2015 compared to $2.57 million last year.

Much of this has to do with Baffinland’s continuing development of the Mary River iron mine on north Baffin Island.

As the mine moves toward completion, the QIA will move from annual quarterly payouts from the Baffinland — approximately $5 million in 2015 — to a percentage of the profits netted by the mining company once production is in full swing.

But the company seems to be struggling of late with rock-bottom iron ore prices. Baffinland recently cut employee wages by 10 per cent, saying the cost savings was “vital in supporting the financial viability of the project.”

The stability afforded to the Inuit organization from the IIBA agreement has allowed the QIA to diversify its investments and bolster its Inuit services since their last fiscal report.

Qikiqtaaluk Corp., a subsidiary company of the QIA, has reinvested in its fishery operations with a $2.5 million overhaul of their fishing boat MV Saputi.

The QC is also pursuing the construction of a new hotel in Iqaluit and is in talks with the Delta chain of hotels to operate the facility.

Cost-cutting is also helping to keep the QIA in the black. The organization shaved more than 8 per cent off its consolidated wage, internal benefits, and operating cost expenses for 2015 for a savings of nearly $1 million from last year.

Perhaps the one negative mark on an otherwise successful fiscal report is the continuing decrease in core funding provided to the QIA from Aboriginal Affairs and Northern Development Canada. It’s down dramatically for the second year in a row.

“It’s definitely a concern, because that’s where a lot of our priorities are, whether it’s cultural or social… it hurts regardless,” said Akeeagok about the funding losses.

“I think there’s enough studies to show that Inuit organizations have received the highest cuts in terms of federal funding.”

The presentation of the report at the QIA meeting came with some sobering perspective — provided by director of finance Scott Wells during his summary.

“Nineteen million dollars worth of money flowed through QIA last year, far greater than the 40 odd years ago when it was approximately $30,000,” he told board members.

The QIA is celebrating its 40th anniversary this week in Iqaluit, with its AGM continuing until Oct. 8.

The QIA provided a smorgasbord of country food to Iqalungmiut who attended the feast, and also entertainment from the Kasuktaqtiit dance group and Daniel Kolola’s Band.