Railway would include 13 locomotives, 480 ore carriers 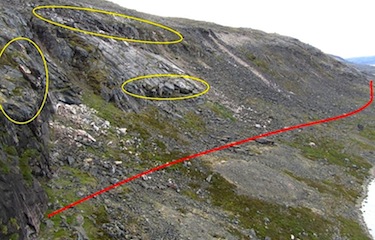 This photo in red in red where Baffinland’s proposed railway will run along a lake, while the areas in yellow show the places that likely to shower the track with rocks. (PHOTO COURTESY OF BAFFINLAND) 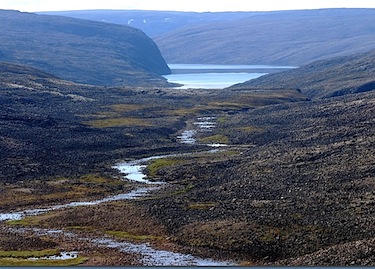 Baffinland’s proposed railway would run through rugged but scenic land on its way from the Mary River mine to Steensby Inlet. (PHOTO COURTESY OF BAFFINLAND) 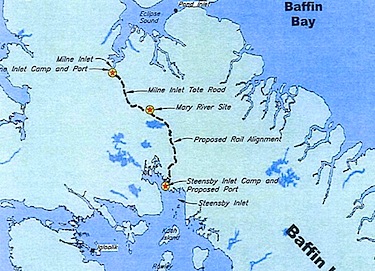 This map shows the proposed route of the railway Baffinland wants to build for its proposed Mary River iron mine. (IMAGE COURTESY OF BAFFINLAND)

Imagine two red and white locomotives decorated with the Baffinland logo chugging across some of the most northerly — and undisturbed — scenery in the Canadian Arctic.

Baffinland Iron Mines Corp. proposes a 149-km railway near the top of Baffin Island to carry iron ore from Mary River to a port at Steensby Inlet, a huge industrial development that would bring thousands of workers to a place now known for cold temperatures, caribou and char.

Diesel will fuel the railway’s locomotives, but its construction will be driven by a growing demand for high grade iron ore, something the Mary River high iron deposit possesses in great quantity.

Baffinland, a private company under the control of ArcelorMittal, the European steel-making giant, and a private investment firm, Iron Ore Holdings LP, need the railway to transport about 18 million tonnes of iron ore from Mary River to Steensby Inlet for shipping markets in Europe and Asia over a period of least 37 years — and some predict up to 100 years.

The railway will include 13 locomotives with 480 ore carriers, divided into four trains of 110 to 130 cars each. Each will make at least two round trips per day between Mary River and Steensby Inlet 300 days a year, according to information from the project’s environmental impact statement.

But the railway won’t be easy to build, said Baffinland engineer Dick Matthews, who talked about the proposed railway’s engineering, design, and environmental considerations April 19 at the Nunavut Mining Symposium in Iqaluit.

Building the railway for the Mary River project will require great feats of engineering, stamina, about $1.9 billion and many workers.

The constraints outlined by Wright include cold winter temperatures (often as low as -50 C), deep permafrost with an active, unstable layer on top, terrain ranging from rocks to soggy bogs, lots of places where rocks could fall and many streams, rivers and lakes to cross or avoid.

These all mean the railway won’t follow a straight line, but will feature 1,400 metres of tunnel and 11 km of culvert crossings.

On its 149-km journey, the train will descend from 207 metres above sea level to 11 metres about sea level at Steensby Port. The heavy train won’t be able to descend quickly or turn any sharp curves.

Holes have already been drilled along the proposed path of the train to check for soil stability — but one feature of the train will be high, firm embankments that will provide stability.

The four-year construction of the railway could start as soon as 2013, if the Mary River project gets through environmental hearings and permitting processes.

The railway will require many bridges, some greater than 100 metres in length, along with two tunnels and 300 culvert crossings.

An access road will also run within the railway’s right-of-way and will be able to to accommodate trucks of up to 100 tonnes capacity.

As well, there will be quarries and temporary airstrips needed to position the large railway construction workforce, equipment fleet and fuel.

Operating conditions, being designed by Canarail Consultants Inc. of Montreal, will not be significantly different than those in northern Quebec, where the old Quebec North Shore and Labrador Railway served Schefferville.

But Baffinland’s railway is just a plan so far.

To build the railway the company needs a “certificate of fitness,” to become a railway operator permit, from the Canadian Transportation Agency, which will participate in the Nunavut Impact Review Board review process.

The Mary River project moves into environmental hearings this July. 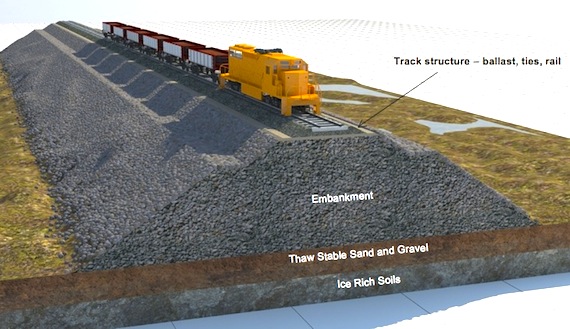 Steep embankments will keep the proposed Baffinland railway track above the layer of permafrost which could shift. (IMAGE COURTESY OF BAFFINLAND)