Voters decide “this place is changing, and the time has come for a change” 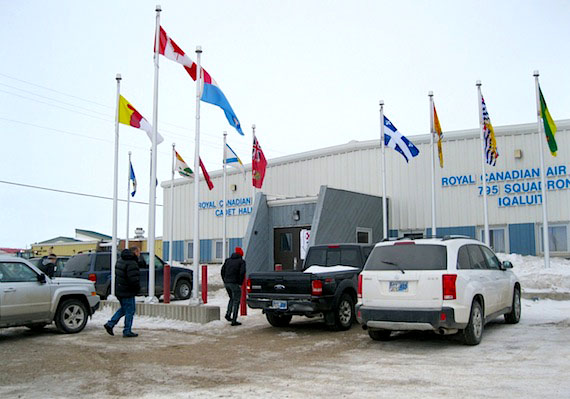 Iqaluit residents file in and out of a polling station at the cadet hall throughout the day, April 20, to mark whether they are in favour of a territorial government proposal to open a beer and wine store in the city. (PHOTO BY PETER VARGA) 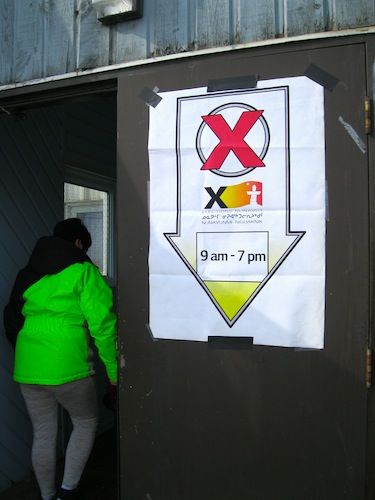 A woman enters the Cadet Hall in Iqaluit during the afternoon of April 20 to cast her vote in a plebiscite on the Government of Nunavut’s proposal to open a beer and wine store in the territorial capital. (PHOTO BY PETER VARGA)

Iqaluit residents said yes April 20 to the idea of a strictly controlled wine and beer store in their community.

Of those who cast ballots, 77.5 per cent voted “Yes” to this question: “Are you in favour of a beer and wine store opening in the City of Iqaluit?”

The raw count at the end of the evening showed 1,126 people voted Yes and 326 voted No, with 10 rejected ballots.

A steady stream of voters stopped by the cadet hall in Iqaluit throughout the vote day, April 20, to have their say on the Government of Nunavut’s proposal to open a beer and wine store in the territorial capital.

The results of the plebiscite vote are non-binding, and, if opened, the wine and beer store would remain a pilot project.

The poll got off to a quiet start at 9:00 a.m. on April 20, with a few residents filing in and out at a time, but ballooned to a dozen or more at a time by late-morning.

On the day of the plebiscite opinions on whether the government should open a beer and wine outlet remained mixed.

Alainga, who said he’s in favour of the store, pointed out Iqaluit is the only capital in the country that doesn’t allow retail outlets for liquor.

The case for not permitting them has become difficult to support as the city continues to grow, he said.

“The place is growing with lots of young people that need to learn how to control what they buy, and control their drinking,” Alainga said.

Opening a beer and wine store presents “a good opportunity for people to learn,” he said.

The community’s last over-the-counter liquor store dates back to the early 1970s when Iqaluit was a Northwest Territories hamlet called Frobisher Bay and had less than a third of its current population.

The city now has no fewer than five bars and restaurants that serve alcohol.

“And even on top of that, there’s a lot of bootlegging,” Alainga said. “I’d like to eliminate all the bootlegging and get all of these closet drinkers to stop buying bootlegged booze.

“This place is changing, and the time has come for a change,” he said. “There’s more people coming in from other communities, and there’s more jobs opening here.”

Experiences in other large northern communities that have recently opened direct retail sales have been positive, Alainga noted, pointing to Kuujjuaq in northern Quebec.

“They’re following the bylaws and the rules, and all of that is going to be the same up here,” he said.

Residents against the opening of a store point to the destruction alcohol has caused in the lives of many community members.

“I see the money people spend on it. I see people that are friendly sober, become strangers when they get two or three beers down,” said Roger Bélanger, who has worked in the community as a taxi driver for the past 16 years.

“I don’t think we’re ready, now, to openly get what we want,” he said, pointing out that alcohol consumption also played a role in the death of loved ones and acquaintances.

“There are some people that I love and I care for, and I wouldn’t want them to start [drinking] at 19 years old,” he said.

“We have enough establishments up here” that serve alcohol, she said.

Annie recalled the community’s last experience with a liquor outlet 40 years ago.

“The majority of us Inuit have always voted against” direct retail sales, she said. “My status hasn’t changed.”

“I think that alcohol is in Nunavut, whether we want to admit it or not,” said Jason Briffet, 40, who has called Iqaluit home for four years.

“I think we need to move forward as a society, and that overall we should take that leap,” and allow direct sales, he said.

Added to that, “we should have programs in place to deal with addictions,” Briffet said. “I don’t think there’s enough of that, but I don’t think we’re going to change getting alcohol out of the territory.”

Canadian residents of the city aged 18 and over, who have lived in the city for at least 12 months on April 20 were entitled to vote in the plebiscite.

Residents not on the voters’ list were able to register at the polling station with photo identification and proof of home address in Iqaluit.

The proposed outlet would require residents to set up a permanent account at the store through which they can make a daily purchase of one case of 12 beers and two bottles of wine.

The plebiscite is non-binding, meaning it and will be used to inform, rather than decide the government’s final say on whether to open an outlet.