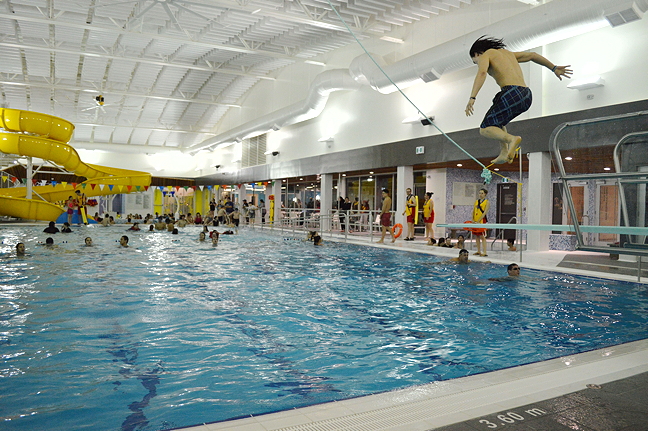 Last one in’s a rotten egg… a man flies off the diving board into Iqaluit’s new pool following the grand opening Jan. 26. (PHOTO BY STEVE DUCHARME)

“We’re here!” said a little girl as she climbed the steps of Iqaluit’s brand new aquatic centre in a remark that seemed both excited and relieved that the wait was finally over.

Indeed, after four years without a pool in Nunavut’s capital, many in Iqaluit can collectively celebrate the end of a sometimes agonizing countdown to the big day.

So it should come as no surprise that many took time out from their lunch hour Jan. 26 to cheer on Iqaluit mayor Madeleine Redfern as she sliced through a ribbon with an ulu, signifying the grand opening of the city’s newest facility and largest ever infrastructure project.

“This creates a much welcome and needed public space where residents from infants to elders can come together and participate in healthy living activities,” Redfern said, flanked by city councillors, Community and Government Services Minister Joe Savikataaq, Nunavut MP Hunter Tootoo and Nunavut Senator Dennis Patterson.

Behind the building’s doors: one of the most modern public facilities built in the North to date, boasting a 25-metre lap pool, leisure pool, fitness centre, saunas, jacuzzi and all the other luxuries you’d find in southern cities.

“Living in the Arctic, some people feel like we have to compromise on the architecture, in terms of our buildings, in terms of our enjoyment of life,” Iqaluit’s deputy mayor, Romeyn Stevenson, told media after the ceremony.

“This building proves we don’t.”

The $40.6 million facility—greenlit by city council in 2013 and heavily criticized by some as overly luxurious for a debt-ridden city—was completed under-budget with about $500,000 to spare, Stevenson confirmed.

But any impact that the building has had on the city’s financial health—once described as “laughable” in 2015—took a back seat Thursday to the bigger impact it will have on the quality of life for Iqalungmiut.

“There’s going to be more places for the children to go, it will take them out of the house more, because its more activity based,” Iqaluit elder Oleepeeka Nooshoota told Nunatsiaq News during the pool’s public tour.

“It’s going to help them both mentally and physically. A swimming pool like this makes Iqaluit a better capital.”

“It’s amazing, beautiful,” said Susie Alainga, who was planning to bring her daughter back later for the free public swim.

But one important person was missing from the celebration—the late former-mayor Jimmy “Flash” Kilabuk who in his years on city council advocated heavily for the facility before his death in 2013.

“It was Jimmy who really understood the benefit this facility could make to our community, especially the youth,” Coun. Simon Nattaq said, as he presented a commemorative certificate to Kilabuk’s family members during the opening ceremony.

“He knew that he wanted to ensure that such a facility would always be accessible to all residents, especially citizens who are too often marginalized and might not be able to afford it.”

But with drop-in and day passes for families of five currently set at $16 or $28 respectively, marginalized Iqalungmiut could be left out after all.

“Right now we’re just building up the fund and the program will roll out as soon as we can,” she told media.

The fund will help about 500 families, who will be invited at a later date to apply to the city for the subsidy, Elgersma explained.

During a gala held the night before the aquatic centre officially opened, the city collected about $18,000 for the fund, Elgersma said.

That will be added to the approximately $80,000 collected already through the city’s REACH campaign.

Lifeguard training and other swim-related certificate courses at the pool will also contribute to the local economy, Elgersma said.

Currently, the facility employs 15 part-time lifeguards, as well as 10 full-time staff working in both the pool area and fitness centre.

Seven of those employees are Inuit.

“It’s always our goal to have a representative workforce,” Elgersma said, who added the facility is still looking to fill one full-time lifeguard position.

And volunteers will run many of the programs and classes offered through the fitness centre.

Beginning on opening day—and continuing today, Jan. 27—admission to all the aquatic centre facilities is free.