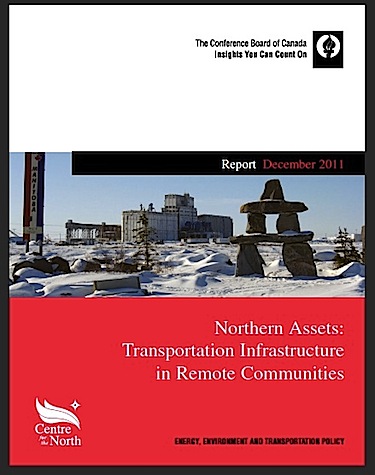 In 2007, when Agnico-Eagle Mines Ltd. was trying to get its Meadowbank gold mine in Baker Lake up and running, the company had little time to prepare for the upcoming Arctic shipping season.

It attempted to move more cargo through Churchill than the Manitoba port was used to handling — more than four times the volume handled the previous year.

Although most of the freight moved successfully, some cargo did not move as quickly as expected, arriving in Churchill after shipping services ended for the season.

As a result, Agnico-Eagle was forced to airlift this cargo out of Churchill to Meadowbank at considerably higher cost.

To save money, the company now ships components of its mining trucks to the port of Bécancour, Que., across the St. Lawrence River from Trois-Rivières, and then has the trucks assembled at the port before they are loaded on to vessels bound for Nunavut.

Assembling trucks at Bécancour helps the company avoid the extra labour costs associated with doing this type of work in Baker Lake.

This revealing story is contained in a report on northern transportation, Northern Assets: Transportation Infrastructure in Remote Communities, released Dec. 15 by the Conference Board of Canada.

The report looks at the challenges facing northern transportation that result from higher costs, limited capacity and a harsh climate.

The report notes transportation infrastructure is considerably more expensive to build and to maintain in the North than in the South.

And climate change is disrupting existing rail and winter-road links, it says.

But that’s why the report’s authors suggest Canada needs a co-ordinated strategy to strengthen transportation links to and within the North.

They suggest governments should also consider greater use of public-private partnerships to accelerate development.

While there’s a large transportation gap between northern and southern Canada, the report says the best approach for addressing this gap is not so clear.

Transportation infrastructure investments in the North are generally for projects that don’t pay for themselves, “yet are vital for economic and community development” because they improve commercial prospects, strengthen regional connections, provide access to key health and social services, and facilitate the flow of people and goods.

Improving transportation in the North will mean developing new infrastructure, improving existing infrastructure, and implementing measures to mitigate and adapt to climate change, says the report.

The report, which includes a case study on the port of Churchill, Manitoba, also examines the proposed Manitoba–Nunavut highway, calling it a “potential game changer for the Port of Churchill’s prospects.”

The Manitoba port town, plus Arviat, Whale Cove and Rankin Inlet would connect to the highway by feeder routes.

There would be more than 60 bridges on the planned route, all of which pushed 2007 estimates of the project’s cost to around $1.2 billion.

To move ahead, Nunavut and Manitoba want to secure federal money.

While the cost-benefit analysis for the road has not yet been publicly released, analyses for these kinds of projects “must capture a full range of economic and social benefits that are unique to northern communities,” the report suggests.

It doesn’t look as favourably on a plan to see airships operating in the North as early as 2014.

Discovery Air Innovations Inc., a subsidiary of the Yellowknife aviation company, signed a tentative agreement with Hybrid Air Vehicles Ltd. this past September to procure a fleet of airships to be used in the North.

The aircraft will be designed to transfer loads on to multiple surfaces, including water, ice, snow, and land, and will be capable of carrying up to 50 tonnes of cargo, but the cost-benfit analysis on the airships did not include the full public infrastructure costs required for air and truck transport.

Nor did it include the inventory cost savings achieved by a vehicle that could operate year-round, the report says.

As for airline transportation, the entrance of southern airlines into the northern market may lower prices, but also erode the level of service provided to the North, it warns.

You can download a copy of the full 68-page report here.