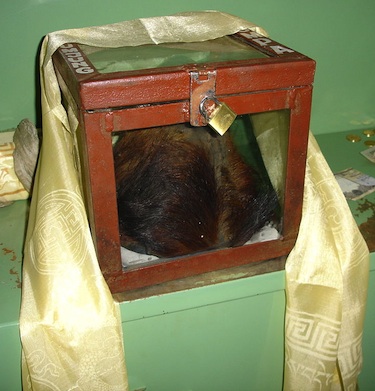 This purported Yeti scalp can be found in the Khumjung monastery in the Himalayas. (PHOTO FROM WIKIPEDIA COMMONS) 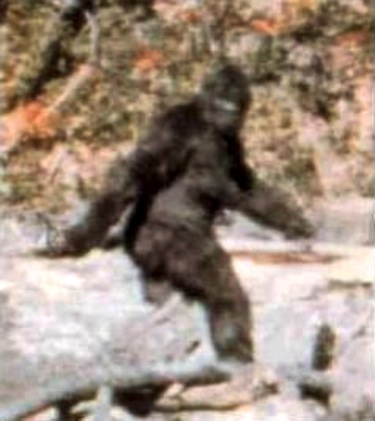 A blurry frame from a 1967 film is alleged by Roger Patterson and Robert Gimlin to show a bigfoot, and by some others to show a man in a gorilla suit. (PHOTO FROM WIKIPEDIA COMMONS) 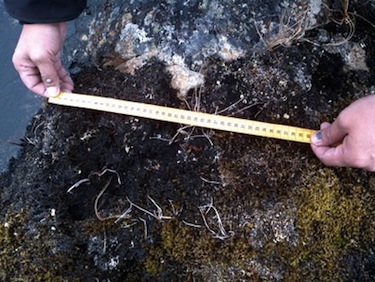 The photo which started it all: a photo that Maggie Cruikshank posted on Facebook, which shows what she believes to be the footprint of a bigfoot spotted near Akulivik. (FILE PHOTO)

Last summer a British scientist named Bryan Sykes published a study that should be of interest to residents of Nunavut and Nunavik: Sykes attempted to scientifically prove the truth about bigfoot.

“I have always been interested to know what happened to the Neanderthals,” those early humans who died out about 40,000 years ago, said Sykes, a professor of human genetics at the University of Oxford in England.

“Whether they just disappeared or whether, as some people who believe in yetis and bigfoot think, reports of these strange creatures are actually surviving pockets of Neanderthals or other early humans.”

By now readers of Nunatsiaq News should know bigfoot, the tall, black, hairy naked creature that Maggie Cruikshank, from the Nunavik community of Akulivik, saw a few years ago while picking berries with her cousin.

The creature has been seen several times since then, including once by Maggie’s brother Harry, on a hill above a remote bay about 45 minutes south of Akulivik, and also by Cree hunters near Wemindji.

But what about the yeti? According to the online encyclopedia Wikipedia, “the Yeti or Abominable Snowman is an ape-like cryptid taller than an average human that is said to inhabit the Himalayan region of Nepal and Tibet.”

The creature first received popular attention in the western world after it was spotted by explorers during the 1920s and 1930s, on a series of early attempts to climb Mt. Everest. The yeti has been spotted in India, China and Mongolia but it’s main home seems to be high in the Himalayan mountains in the countries of Nepal and Bhutan.

“Like a lot of people I was curious to know what was behind these stories,” said Sykes. “I also was a bit fed up with reading in the newspapers that the yeti had been found, but you never ever get to see the results.”

So Sykes concocted a study to show if bigfoot and yeti sightings could stand up to scientific scrutiny. He asked museums and individuals who had managed to obtain hair samples from yetis and bigfoots to send him some of their material.

Sykes and his team cleaned the samples to remove any surface contamination, such as accidental human hairs then subjected the most promising samples to genetic analysis.

“A lot of scientists thought I was crazy doing this,” said Sykes. “But I argued there was nothing particularly strange about our experiment — it is not beyond the scope of science to investigate this material.”

The results, which were published in July 2014 in the Proceedings of the Royal Society, seem to crush the hopes of bigfoot and yeti believers around the world.

Of the 37 samples selected for genetic analysis, half a dozen turned out to be from the American black bear. Four samples were shown to come from either a wolf, coyote or dog and another four samples proved to be from a cow. Several samples were from horses, and a few were from raccoons.

“It is important to remember that I can only say things about the samples that I actually tested,” said Sykes. “In other words, I haven’t proved that these animals don’t exist. All I have done is shown that of the historically famous samples given to me, none turned out to be from another type of human.”

However, there was one unexpected find that is especially fascinating for residents of the North. Two of the samples Sykes examined, one from northern India and one from Bhutan, showed a 100-per cent-genetic match with DNA recovered from the fossil of a polar bear that lived 40,000 years ago. According to Sykes’ paper, the sample did not match with modern polar bears.

These findings seems to imply that an ancient version of the polar bear may still be wandering the mountains of Asia, a shocking discovery for a species whose range, at least according to many scientists, is dwindling.

“In fact there is an expedition being planned to see if we can observe one of these things still living in the wild,” says Sykes. “The two samples are from different ends of the Himalayas, so I imagine there are some in between.”

But not all scientists agree that Sykes’ ancient polar bear is even a polar bear at all.

“I don’t think there is anything wrong with the philosophy of the paper,” said Andreanna Welch, an evolutionary ecologist at Durham University in England.

“But based on the amount of data they published, it is equally possible the samples came from a brown bear as well as a polar bear.”

Welch’s work often involves using sophisticated genetic tools to examine DNA, the hereditary material present in almost all other organisms. In 2012 she co-published a paper discussing hybridization between polar bears and brown bears. Welch ran the DNA sequence reported in Sykes’ paper to be from the ancient polar bear through the National Center for Biotechnology Information database and found that the sequence differs by only one position from many grizzlies and modern polar bears.

“Differing by one position in a sequence this short is not very much,” says Welch, “and so in my mind this is why this data provides no evidence to support the idea that the ‘yeti’ sequence matched the ancient polar bear, and why I don’t think we can say definitively whether the sequence came from a grizzly or polar bear.”

Meanwhile, back in Akulivik, where polar bear sightings are a regular occurrence and would raise no eyebrows, the creature known as bigfoot is still being spotted, said Maggie Cruikshank.

“Bigfoot was sighted this summer,” said Cruikshank, including one sighting by a young boy in Akulivik. “He told me that he saw an animal far, far away that was moving,” says Cruikshank. “He told me he thinks it is a bigfoot.”

In another instance, says Cruikshank, campers heard an animal hollering and assumed it to be a bigfoot. “They are used to hearing wolves, so they know what they are hearing,” she says.

“Some people were trying to convince me it was a grizzly bear, because those grizzlies stand up,” added Cruikshank. “But they don’t have long arms like bigfoot.”

“You can tell if an animal is like human or animal,” she continued. “Bigfoot has two legs and arms and a head like a person, and a bear has four legs and a big bum and a very little head.”

Why have more people in Akulivik not gone public over the recent bigfoot sightings?

“They don’t report because of the non-believers,” says Cruikshank. “I mean those skeptics. We live in a small town.”

Cruikshank drew a great deal of criticism when she first spotted her bigfoot back in 2012, because she claimed to have a video of the creature but refused to release it to the public.

“Many people want to see the video and are starting to make negative comments,” Cruikshank said at the time. “We want to post it but we don’t want to scare the children.” Cruikshank still has not posted the video, which she says is in the possession of her cousin.

“There are a lot of frauds and hoaxes, and I’ve brushed up against a few of these myself,” noted Sykes. “People who were not prepared to have their evidence tested.”

“I think it is definitely possible that there is a lot more for people to discover,” said Welch. “So finding a new species is really cool for sure, but, as a scientist, I think I spend more time thinking about how do we get the things we have today? I want to know why it is there, and why is it the way it is.”

Maggie Cruikshank is searching for the same sort of answers — namely, why is there a bigfoot regularly appearing in Akulivik?

The young boy who spotted the bigfoot this summer saw the creature near the river by the mountains just beyond the community.

“It was at the same spot where I’ve seen it,” said Cruikshank. “He seems to be living around here.”

She then rethought her words and added, “I don’t know if that creature is a he or she.”