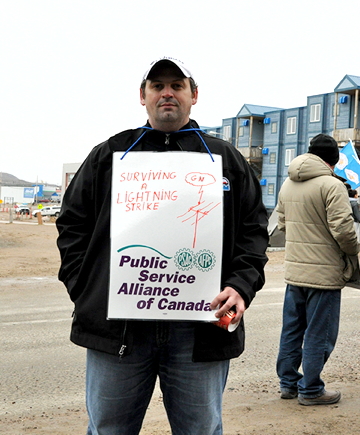 Marius Barbars, an electrical engineer with QEC, on the picket line July 16 in Iqaluit. (PHOTOS BY THOMAS ROHNER) 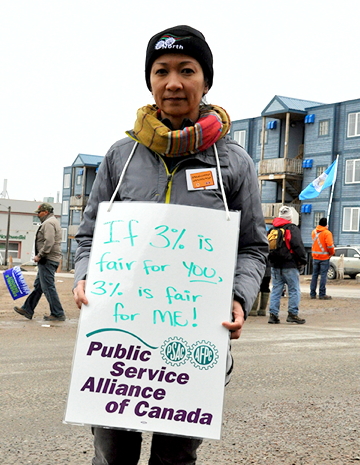 Sheila Papa, a communications manager with QEC, on the picket line in Iqaluit July 16. 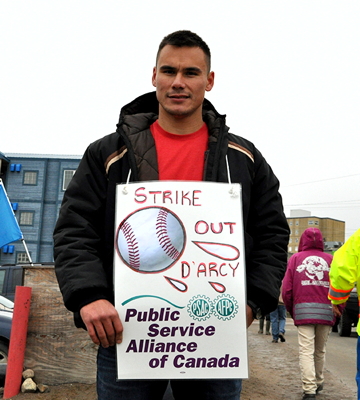 More than 140 unionized QEC workers walked off their jobs across Nunavut July 16, the first day of a strike called by the Nunavut Employees Union.

Workers on the picket line told Nunatsiaq News this strike is about getting a fair wage to cover the high cost of living in the North.

“I believe this strike is about the cost of living, especially if you have kids in daycare,” said Marius Barbars, an electrical engineer with QEC.

Barbars, whose wife also works for the QEC, said he has a three-year-old daughter.

Barbars said his family has a strong connection to Iqaluit because they’ve lived here for seven years, and because his daughter was born in Iqaluit.

“If the strike is going to continue long, we’re thinking we’re going to leave the North,” he said.

But other workers say they’re willing to wait as long as it takes to get a fair deal.

Sheila Papa, a communications manager with the QEC, told Nunatsiaq News that her employer’s negotiating tactics have led some former coworkers to leave the company.

“They want us to give up on what we think is a fair deal, but our answer is no — we’re not giving up,” Papa said.

Salary increases for the next few years proposed by the QEC at the negotiating table are not enough to cover the cost of living, especially with inflation, Papa said.

“Why are they getting a cost of living increase, and we’re not?”

Papa said she doesn’t have any children, so other co-workers might be hit harder than her if the strike drags on, but she is supporting her partner who is currently in school.

And the possibility of a long strike is troubling.

“I’m extremely worried. Should I start refreshing my resume?”

Sateana Goupil, a trades helper in QEC’s maintenance department, said, for now, he’s staying positive in hopes that both sides can come to a fair compromise.

“We’re all here to support each other,” Goupil said.

Like Papa, Goupil said he doesn’t have a family to support.

But he recently bought a vehicle, set to arrive with this year’s sealift, which Goupil said will increase his cost of living.

“So the timing’s not great for me, but it’s important we’re out here,” he said.

QEC employees have been without a contract since Dec. 31, 2013, the union’s president, Bill Fennell told Nunatsiaq News July 13.

But negotiations over the past eighteen months have been frustrating and fruitless, the president said.

The union has asked for a three-year contract with consecutive salary increases of 2, 2.1 and 2.25 per cent over those three years.

The QEC wants a four-year deal with salary increases of 2, 1, 1 and 2 per cent over those years.

Picket line organizers were planning to march to the Legislative Assembly at around 11:30 a.m. July 16.