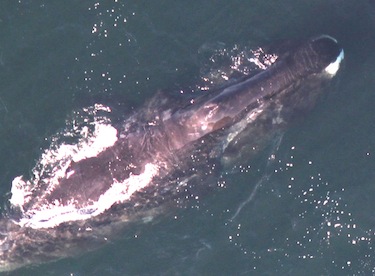 Bowhead whale observed off the coast of Orleans, Massachusetts.(PCCS IMAGE UNDER NOAA PERMIT #14603)

Why did the bowhead whale go to the city of Boston on the northeastern coast of the United States? That’s just what scientists are still trying to figure out.

Last winter, for the first time in recorded history, a bowhead whale was spotted with a group of right whales off the coast of Cape Cod in Massachusetts.

“It was extraordinary and mind-blowing because no bowhead has been recorded at this low of a latitude in the Atlantic,” said Dr. Charles “Stormy” Mayo, a senior scientist at the Provincetown Center for Coastal Studies, on Cape Cod.

“In all of my time I have not seen any other species mixing in these dense social groups with right whales,” said Mayo. “The social groups are so dense that the whales literally are in physical contact.”

The sighting raises a whole list of interesting questions, the first being, what in the world was a bowhead doing so far south?

It’s all guesses at this point but Mayo has a few ideas. For one, there’s global warming.

“You can imagine climate change would result in animals searching around a little more wildly,” explained Mayo. “That said, it seems odd that an animal would spread its range south as the Arctic warms.”

But there is another possibility, the bowhead sighted off Cape Cod wasn’t from the eastern Arctic at all.

Thanks to reduced ice in the Northwest Passage, bowhead whales from Nunavut and Greenland are already mixing with bowheads from Alaska, according to a 2011 study in the scientific journal, Biology Letters.

Mayo outlined a scenario to explain why a bowhead that had traveled through the Northwest Passage from the western Arctic would continue south down to Cape Cod.

“If an animal were tapped in the east when it was supposed to be in the west you could imagine a lot of its oceanographic and visual clues might be missing,” said Mayo. “It would be focused on different cues and might very well be wandering aimlessly.”

The question that comes to mind next is a bit racy. First, it’s best to explain that right whales travels in social groups, typically consisting of just one female and as many as two dozen males. And each one of those males want the same thing, to mate with the female.

So, given that bowheads are now mixing in with groups of mating right whales, we get the following very interesting question: could a bowhead whale mate with a right whale?

“We used to say species are species and they can’t interbreed,” said Mayo. “But now we know there has been interbreeding between minke whales and fin whales.”

What is known is that right now it’s late September off the coast of Massachusetts. The sun is still hot, the water is still warm and tourists from all over the world are flocking to what is one of the most popular whale watching destinations on the planet. They come to see humpbacks, fin whales, minkes and right whales, but the possibility of seeing another species, one typically found in the Arctic at that, is thrilling.

“There’s an excitement about whales here that’s really infectious. I think it infiltrates the whole town,” said Mayo whose father, like many peoples’ fathers and grandfathers’ in coastal Massachusetts, once made a living killing whales.

Biologists also say that increased sea ice melt could be responsible for the appearance of narwhals in Cambridge Bay. Narwhals appear to be moving west — or even over the top of the pole— as there have also been sightings in the Beaufort region and in Alaska.