“Despicable to think that people are so low and desperate” 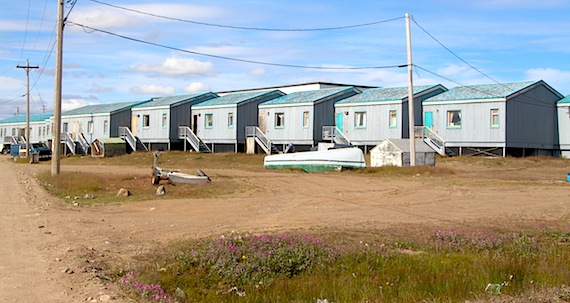 At the back of the elders’ apartment units Aug. 14, all is quiet—but the complex has been the target of at least two crimes during recent months including one on Aug. 10. (PHOTO BY BETH BROWN)

Many in Iqaluit say they are outraged over a recent break-in at one of the apartments for elders adjacent to Iqaluit’s Qammaq elders centre.

“Sad,” “no respect,” “scary,” “unbelievable and “disheartening” were among words used on social media after Iqaluit resident Eva Groves reported the theft at her mother’s apartment on social media.

“It is despicable to think that people are so low and desperate,” said one man.

During the break-in, reported to police Aug. 11, Groves said, thieves took a large flat-screen television and an older iPad.

“I am just thankful she was not home when the incident happened,” Groves said.

Another resident of the elders’ apartments, which are managed by the Iqaluit Housing Authority, had also told her that his unit had been broken into a number of times.

Many called for a security guard and new locks for the elders’ apartment doors.

The Iqaluit RCMP confirmed Aug. 14 that it is “currently investigating a complaint of a break and enter that occurred at 227 Queen Elizabeth Way in Iqaluit.”

“We always encourage anyone with information related to a crime to report it to their local RCMP detachment or anonymous tips can be sent to Crime Stoppers by calling toll-free at 1-800-222-8477 (TIPS) or by submitting a secure web tip here or text ‘NWTNUTIPS’ plus their message to 274637 (CRIMES,)” RCMP spokesperson Cst. Danielle Pollock told Nunatsiaq News.

When contacted Aug. 14 for comment about the break-in, the Iqaluit Housing Authority said that it had not received a report yet about the theft and had not visited the apartment where the break-in took place to see how the breach of security occurred, or to make repairs.

This is the second recently-reported criminal incident at the elders’ apartments.

In May, a 73-year-old elder was injured when an unknown assailant broke into her Iqaluit apartment in the early morning and attacked her while she was asleep in bed.