“It’s about the emotion behind the science” 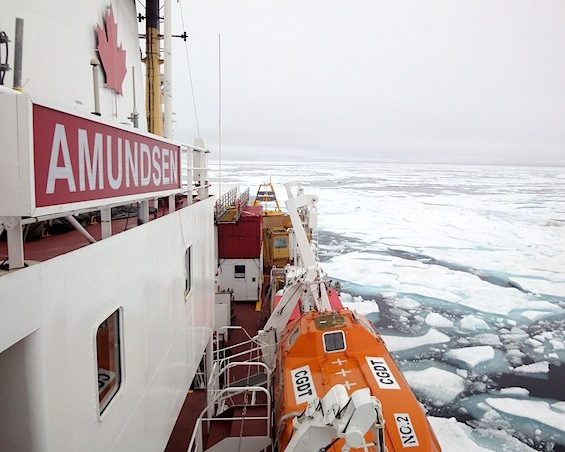 If you think life on board an Canadian Coast Guard researcher icebreaker like the Amundsen is boring, you’ll want to see the film, “Breaking Ice,” which is screening Jan. 25 at the Winnipeg Art Gallery.

As the decision was made to scuttle the scientific mission of the CCGS Amundsen last June, the debate added to the drama of a documentary film which was already under production at the time.

It’s called “Breaking Ice,” and you can see the film this Thursday evening at the Winnipeg Art Gallery.

With 40 scientists on board the Amundsen, the icebreaker diverted from its course to assist in search and rescue operations and help ferries and fishing boats navigate the ice-clogged waters of the Strait of Belle Isle, off Newfoundland.

Before the decision was made to cancel the science plan, some of the scientists on board the Amundsen had tweeted that they had put their research activities on hold—with no complaint—as the attention of the icebreaker’s crew turned to other activities.

Then the science team of the Amundsen cancelled the first leg of its 2017 research plan “due to complications associated with the southward motion of hazardous Arctic sea ice.”

That cancellation postponed the $17-million, four-year Hudson Bay System Study, led by the University of Manitoba, because by dealing with the extreme ice conditions in the Strait of Belle Isle, the ship would arrive too late in Hudson Bay for scientists to complete their research.

So there was drama, and the website of “Breaking Ice” says the film is “about facing the unending personal and professional challenges of conducting science in the Arctic.”

“it’s not just about the science. It’s really about the people behind the science—their life onboard the ship as they work 24/7 under tight timelines, amid homesickness, adversity, and facing hazards inherent to the Arctic, all while wrestling with their own thoughts on what they’re finding and how it relates to their lives back home and the lives of those who live in the North.” says the film’s description. “In short, it’s about the emotion behind the science… ”

And it led to a different film altogether.

“As for my original plan, well, I’m not sure it matters,” the film’s director Christopher Paetkau from Build Films told Nunatsiaq News. “I mean, who can plan for an expedition being cancelled or for a search and rescue? Originally, I simply wanted to tell stories about the scientists doing their work, and find whatever drama there was in that and showcase that, but the scientists were tested in more ways than they were used to, and they handled it remarkably well… even up to and including the cancellation of the BaySys expedition into Hudson Bay.”

The Winnipeg screening is “a sneak peak look at it in order to get some audience feedback before we lock picture,” Paetkau said.

The film’s presentation gets underway at 7 p.m. at the Winnipeg Art Gallery at 300 Memorial Blvd, where director Paetkau, Kathleen Munson from University of Manitoba and Stephen Borys, the WAG’s director and CEO, will be on hand. Admission to the screening is free.