As of 2:30 p.m., courthouse reopens after suspicious package removed 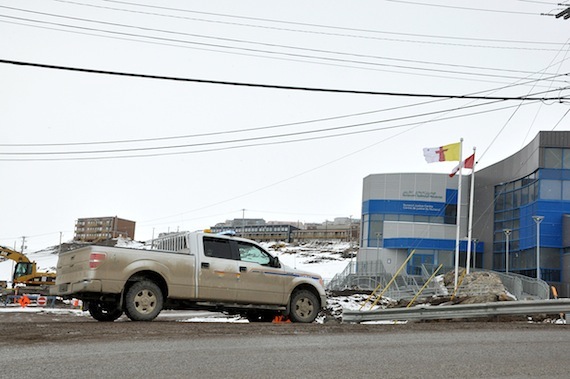 A Nunavut RCMP truck blocks access to the Nunavut Court of Justice building in Iqaluit May 7 at about 11:30 a.m. An unmarked black SUV blocks the entrance from the other way. The situation was resolved by 2 p.m., police said. (PHOTO BY THOMAS ROHNER) 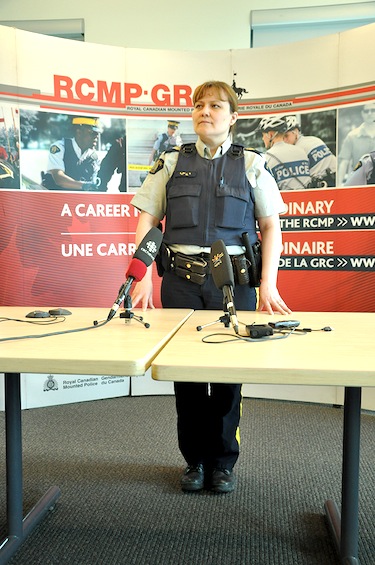 Sgt. Yvonne Niego holds a news conference at the Nunavut RCMP headquarters in Iqaluit May 7 about a suspicious package received at the Nunavut Court of Justice earlier in the day. (PHOTO BY THOMAS ROHNER) 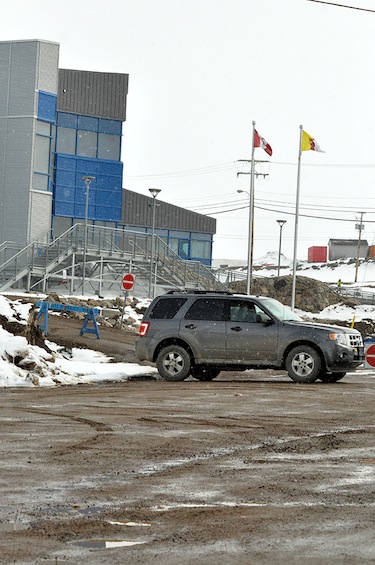 At about noon May 7, a barricade blocks an entrance to the Iqaluit courthouse, which closed on the morning of May 7 but reopened early that afternoon. (PHOTO BY THOMAS ROHNER)

Nunavut police say they have resolved a “situation” at the Iqaluit courthouse involving a suspicious package.

The package “has been safely removed,” and the Nunavut Court of Justice “has returned to routine daily function,” said an RCMP news release sent out around 2 p.m. May 7. Police continue to investigate.

The Iqaluit courthouse reopened for regular business as of 2:30 p.m.

Sgt. Yvonne Niego of the Nunavut RCMP said at an afternoon news conference that police have taken the package to a “semi-secure location” and that it will stay there “until such time as we can get the proper resources in place to make that examination.”

Right now, the Nunavut RCMP are relying heavily on experts in the South and are likely to bring someone to Iqaluit to help examine the package, Niego said.

And she said it was people on the receiving end of the package at the courthouse who alerted police in the morning of May 7 after it was couriered to them by a delivery person.

“Institutions are starting to look at safety protocols a lot more safely, and in this case the courthouse did what they should have done,” she said.

Niego did not say what made the package suspicious, or what it may contain, and she couldn’t say when the investigation will finish or whether the results will be made public

Police put the area around the courthouse under a lockdown after receiving a call about a suspicious package at around 10:30 a.m. May 7. They evacuated everyone and erected barricades to block access to the building.

They also erected blockades within the 500 block where the courthouse is located, although the main road, Niaqunngusiaq, remained open.

The RCMP said in their news release that police appreciate the “quick collaboration of the City of Iqaluit Fire Department as well as the patience of the community members affected.”

Anyone who has information is encouraged to contact police by submitting a tip online at www.nwtnutips.com or by calling 1-800-222-8477.

The Government of Nunavut first sent out an emergency bulletin shortly after 11 a.m., saying, “the Iqaluit courthouse is closed until further notice. RCMP are on location investigating the situation. More details will be provided when they are available.”

It’s not clear if the suspicious package in Iqaluit is related to a rash of similar occurrences at courthouses in Nova Scotia, Newfoundland, Manitoba and the Northwest Territories over the past two to three days.

On May 5, Global News reported that suspicious packages were delivered to five different courthouses in Nova Scotia.

On May 6, the Grand Falls-Windsor Advertiser reported the removal of suspicious packages from five locations in Newfoundland-Labrador, including the provincial government building where the Supreme Court of Newfoundland is located.

Over the past week, Iqaluit has been rocked by potentially violent incidents.

This past week, on May 1, RCMP officers were called to a home in the city’s Creekside Village complex, where a distraught man had barricaded himself inside a rowhouse unit with a weapon.

The Creekside Village incident closely follows a 42-hour standoff in the Happy Valley area of Iqaluit, which ended peacefully April 30.

On May 1 in Iqaluit, the RCMP convened a news conference at the “V” Division headquarters to discuss that standoff.

with files from Thomas Rohner