Valcourt exempts Nunavut iron mine expansion from land use plan 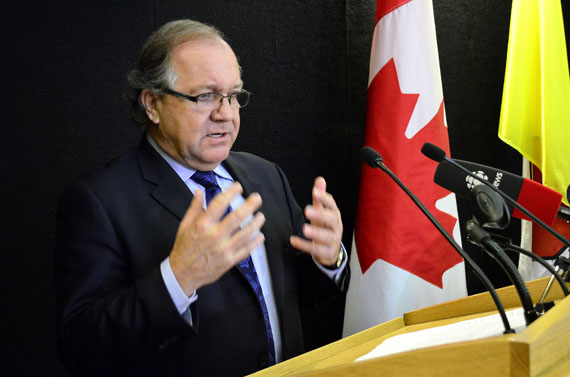 Bernard Valcourt, the minister of Aboriginal Affairs and Northern Development, has sided with Baffinland Iron Mines Corp. in its dispute with the Nunavut Planning Commission.

In a letter dated July 13, Valcourt exempted Baffinland’s ambitious “Phase 2” proposal for the expansion of iron ore production and shipping at the Mary River mine from the North Baffin Regional Land Use Plan.

At the same time, he referred the proposal directly to the Nunavut Impact Review Board.

This follows a decision by the NPC this past April that rejected Baffinland’s proposal.

The NPC found the expansion plan’s potential impact on sea ice does not conform to the North Baffin Regional Land Use Plan.

But Baffinland, citing a provision in Article 11 of the Nunavut Land Claims Agreement, reacted by asking Valcourt to exempt the proposal from the land use planning process, a request that the Qikiqtani Inuit Association immediately opposed.

This week, Baffinland got their answer — and it’s a yes.

“The ability to exempt a project proposal from the requirement that it conform to the applicable land use plan is an important part of the Nunavut Land Claim Agreement’s integrated system of resource management,” Valcourt said.

Article 11.5.11 of the NLCA states that if the NPC determines a proposal does not conform to a land use plan, the developer may ask the minister for an exemption.

The minister is allowed to grant the exemption request as long as they make written reasons available to the NPC and to the public.

In those reasons, Valcourt rejected submissions from the Qikiqtani Inuit Association and the Nunavut Tunngavik Inc., who each said an exemption would be inconsistent with the intent of the NLCA.

“First, it is difficult to see how a process explicitly included within a regulatory scheme could be inconsistent with the intent of that scheme. Second, a ministerial exemption does not bypass or circumvent the planning commission,” Valcourt said.

Taptuna told Valcourt that if the Mary River project fails, at least 260 jobs and millions in wages and benefits could be lost.

“Delays are costly to us all, and good opportunities can disappear,” Valcourt said.

Another option available to Baffinland was to ask the planning commission for an amendment to the North Baffin Regional Land Use Plan.

But Valcourt said that process would be too unwieldy and might raise broader issues not related to Baffinland’s specific proposal.

He also said the North Baffin Regional Land Use Plan is likely to be soon replaced by the NPC’s Nunavut-wide land use plan, which is entering its final stages.

On that point, Valcourt said the Hamlet of Pond Inlet does not support the idea of a land use plan amendment and wants Baffinland’s proposal to go directly to the NIRB.

“I understand the Mayor and Hamlet of Pond Inlet share the view that the impact assessment process is the best way to proceed, and would give community members and effective forum to consider and provide input on the project proposal in a timely manner,” Valcourt said.