“We are avoiding foreseeable problems” 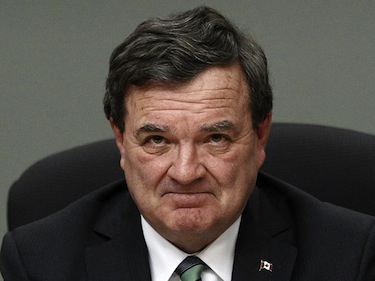 OTTAWA — For the first time since taking office in 2006, Prime Minister Stephen Harper’s Conservatives have put their imprint on Canada through a budget that includes major changes to pensions, industrial research, immigration, energy and the size of government.

The development came Thursday, as Finance Minister Jim Flaherty introduced a budget touted by the Tories as a forward-looking plan to foster Canada’s economic strength in the long term.

The fiscal blueprint, although identifying $5.2 billion in annual cuts to program spending within a few years, falls short of the austerity package that some had feared.

“Our government is looking ahead, not only over the next few years, but also over the next generation,” Flaherty told the Commons in his budget speech.

“We are avoiding foreseeable problems while seizing new opportunities in the global economy. The reforms we present today are substantial, responsible, and necessary. They will ensure we are focused on enabling and sustaining Canada’s long-term economic growth.”

The $276-billion budget comes nearly one year into the government’s majority mandate, and the Conservatives say they are using it to make ambitious reforms.

• The Old Age System (OAS), the backbone of the country’s public pension system, will be changed, starting in 2023, so that the age of eligibility is gradually increased to 67 from 65. The controversial change will affect Canadians under the age of 54.

• Government funding and incentives on industrial research will be shifted to promote commercial innovation to boost the economy.

• Environmental reviews of major oil, gas and mining projects will be shortened to ensure the ventures get off the ground sooner to promote economic development, and some reviews will be handed to the provinces only.

• The immigration system will be reformed to process applicants faster and emphasize getting skilled immigrants into the country to fill vacant jobs.

• Government program spending will be slashed by $5.2 billion within three years, a 6.9-per-cent reduction of the $75 billion in programs that were reviewed.

• Within the public service, 19,200 jobs will be eliminated over three years (4.8 per cent of the workforce), including 600 senior executives.

• The federal deficit, forecast to be $24.9 billion for the fiscal year ending this month, will be eliminated by 2015-16.

• The country’s economy is forecast to grow by 2.1 per cent this year and 2.4 per cent next year.

• Charities will be required to provide more information about their political activities and their funding from foreign sources.

• There are no major tax reductions and the government says there are no tax increases.

• The employment insurance system will be retooled to cap premium increases and to introduce pilot projects that remove “disincentives” for people on EI to also find work.

• The penny will removed from circulation this autumn, saving the Canadian economy about $11 million a year.

• The Canadian Broadcasting Corporation, the country’s national broadcaster, will see its government funding slashed by $115 million — about 10 per cent.

One of the most significant changes is on Old Age Security, which will see the age of eligibility for OAS benefits will gradually increase to 67 from 65, starting in 2023.