Caller told police that teen had no parents, “was up to no good” 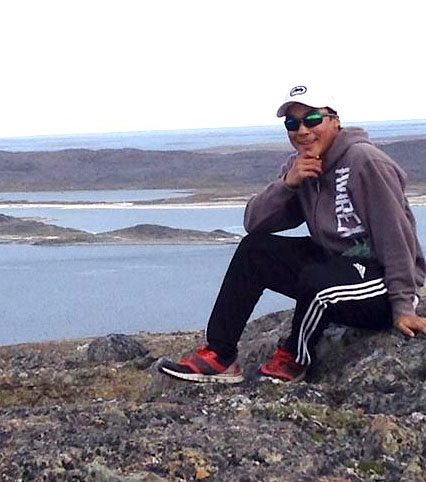 Illutak Anautak, pictured here, stabbed eight people, killing three of them, before police shot and killed the 19-year-old in June 2017. A coroner’s report into his death suggests Anautak was angered after someone called the police about him and told officers the teen had no mother or father. (FILE PHOTO)

Readers may find some of these details disturbing

An early morning call to Nunavik police appears to have triggered an Akulivik teenager’s deadly attack on his family last year.

On June 10, 2017, Illutak Anautak stabbed eight of his family members—killing three of them—before police shot and killed the 19-year-old.

Newly released reports from Quebec’s coroner’s office describe a chaotic and violent early morning scene in the village of about 600, where Anautak awakened sleeping family members with a knife attack.

Kativik Regional Police Force officers responded to two calls just after 8 a.m. that morning: one about a fight in house #143, the other about an injured person at house #200.

When officers arrived on the scene shortly afterwards, they discovered the injured 12-year-old boy collapsed and bleeding outside his home. Anautak was there holding a bloody knife, the coroner’s report noted.

At this point, Anautak had already written a post on his Facebook profile, saying he had killed five people and was prepared to kill others.

Illutak was walking towards his grandmother’s house nearby armed with knives and threatening to kill others, when police officers intercepted him, eventually shooting Illutak before he could enter the home.

The 19-year-old was shot six times and died at the scene.

All of this transpired somewhere between 7:30 a.m. and 8:30 a.m., according to coroner’s reports for each of the four deceased persons.

But the report on Illutak’s death notes that the KRPF received a call even earlier that same morning.

An unidentified person made a call to police at 6:42 a.m., reporting that Anauktak was heavily intoxicated at house #146.

The caller told police that Anautak had no mother or father and that “he was up to no good,” the coroner wrote in the French-language report.

According to Anautak’s family members, this upset Anautak and his attack later that morning was in response to that comment.

It’s unclear if police ever responded to that call; there isn’t any mention of it in the coroner’s reports and the incident remains under investigation.

The report noted that Anautak had a blood alcohol level of 141 mg/100 ml at the time he died.

A cousin who had been with Anatauk the previous evening said they were having a few drinks that night and Anautak left at about 1 a.m., but he said the 19-year-old was neither drunk nor angry at the time.

The cousin described Anautak as having family problems. It’s also unclear where Anautak was living before he died; family members described him as living on and off with different relatives.

Anautak’s mother, Sarah, was severely beaten a few years ago and later died from her injuries. The coroner’s report does not list his father. Anautak had also lost a brother to suicide.

The coroner’s report said the 19-year-old had no psychiatric history in his medical file.

Because Anautak was killed by police, Quebec’s independent police investigation body, the Bureau des enquêtes indépendantes, is looking into the circumstances of what happened on June 10, 2017. That investigation is ongoing.