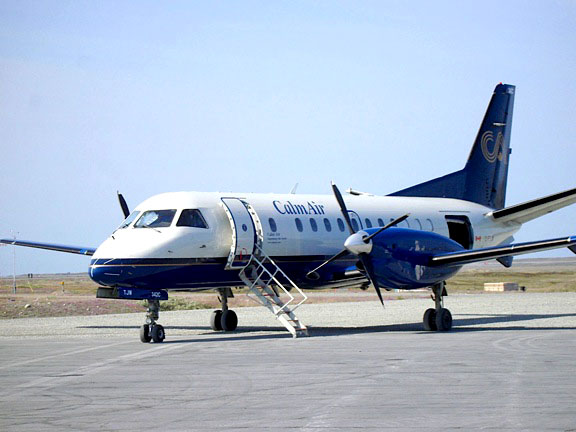 An Arviat petition bearing 500 signatures, demanding the resumption of direct Calm Air flights between Arviat and Churchill, isn’t likely to produce its intended results. But follow-up talks with the company may see additional services provided to passengers who are forced into lengthy layovers in Rankin Inlet. (FILE PHOTO)

Calm Air said it won’t restore an air link between Arviat and Churchill, but the airline pledges to improve air services for passengers in the Kivalliq community.

Hundreds of Arviat residents have signed a petition asking Calm Air International—the only airline that serves their community of roughly 3,000—to resume flights from Arviat to Churchill, Man., which were cancelled a few years ago.

The petition, launched by John Main and Simona Baker, has been signed by more than 500 voting-age Arviat residents.

They say they want to see a direct flight between Arviat and Churchill, about 260 kilometres to the South, instead of first having to fly about 200 km north to Rankin Inlet.

But when petitioners sat down with Calm Air, Kivalliq Inuit Association representatives and their local MLAs July 18, they learned that current routing and airline partnerships won’t allow for the restored link.

As it stands, a change to current routing could mean Calm Air wouldn’t be able to offer daily flights between Arviat and Rankin, which requires that a plane overnight in the community, said Calm Air president and CEO Gary Bell.

In Churchill, he noted, there’s no infrastructure capable of accommodating company planes overnight.

“We got a lot of calls from people in Arviat after the petition went out, saying, ‘please don’t change the schedule if we’re going to lose the plane that overnights in Arviat,’” Bell said.

Another reason the company nixed the idea is that returning to the old routing system wouldn’t be convenient for other communities in the Kivalliq.

The old milk-run route did fly from Arviat to Churchill and then directly to Winnipeg, but there were many stops involved for travellers from communities like Chesterfield Inlet, Baker Lake and Rankin Inlet, Bell pointed out.

Bell added that the lengthy flight made the company uncompetitive when First Air began routing through Rankin.

He said that Calm Air saves between $8 million and $10 million each year due to its new routing, which positions Rankin Inlet as its hub.

Calm Air’s original route was changed in July 2015, after the company partnered with First Air.

On top of saving money, the current flights carry higher payloads, and can deliver more cargo, Bell said, such as fresh groceries, directly from Winnipeg.

When the flight was delivering cargo through Churchill, food was already a few days old, since it had to be delivered via rail.

Instead of restoring the Arviat-Churchill link, Bell said the airline will look into the possibility of opening a transient centre for passengers in Rankin, to provide a place to rest with light refreshments.

The company said it will update the community about those plans in the fall.

A similar centre is available in Churchill, funded by the Government of Nunavut, though MLAs said at the July 18 meeting that the Churchill transient centre is under-used.

While the petition is on the sidelines for now, petition organizer John Main said he’s glad to see some good come out of it.

“Even if we don’t get that Churchill flight back, if things are made more comfortable for people travelling through Rankin, that will be a step in the right direction,” he said. “It was great to see people voice their concerns.”

The petition also suggested that tourism in Arviat would benefit from a flight connected to Churchill.

In response to that, Calm Air is committing $200,000 to help Arviat residents create tourism initiatives from the community, Bell said.