“I understand more and I have more confidence to speak” 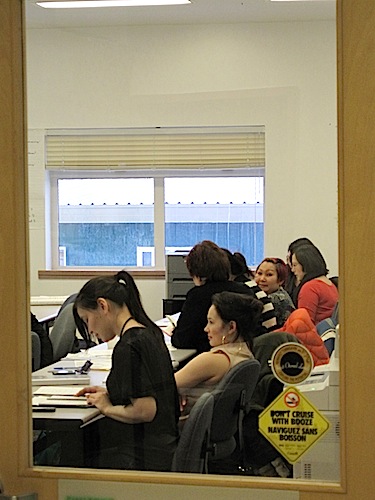 Students in the beginner’s class in Inuinnaqtun, include Inuit as well as newcomers to the Kitikmeot region, listen to teacher Jessie Lyall during their recent class. (PHOTO BY JANE GEORGE) 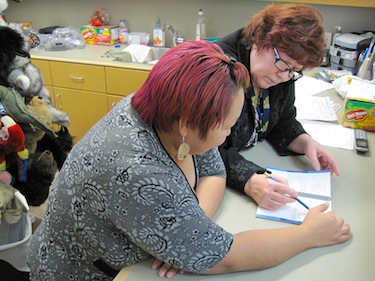 Trisha Ogina helps her fellow student Pam Langan, who both work at the May Hakongak library and cultural centre in Cambridge Bay, with her Inuinnaqtun language materials. (PHOTO BY JANE GEORGE)

CAMBRIDGE BAY — During the afternoon of Oct. 10, following their Inuinnaqtun language exam earlier in the morning, Pam Langan and Leggie Luz Cristobal were back at work in the May Hakongak library and cultural centre in Cambridge Bay.

“I went from only knowing how to say koana [thank you] to much more,” said Cristobal, one of 10 adults in this western Nunavut community, who took the Pigiarvik or beginner’s level Pirurvik Inuinnaqtun course from Sept. 29 to Oct. 10.

As for her colleague and fellow librarian, Langan, who scored in the 90s on the final exam, the two-week intensive course was nonetheless a long haul: she came in early to work, to study with Cristobal, then headed to the course at 9 a.m., and finally, after the course ended at noon, worked all afternoon and then crammed late into the night and on weekends.

But, among the other things Langan now knows, there’s how to sing “you are my sunshine” in Inuinnaqtun, a tune she practiced for the elders who come in three times a week to the library and cultural centre work on heritage projects.

And Langan said she feels more confident about speaking.

“I went up to the airport and ran into Bill Lyall and I said that I had to come to the airport, in Inuinnaqtun, mivik-munngau-riaqaq-tunga — and he understood me,” Langan said.

For their colleague, Kitikmeot Heritage Society programs manager Trisha Ogina, the course re-awakened her knowledge of her first language, which she learned as a young child from her grandparents in Uluhaktok.

“I understand more and I have more confidence to speak,” said Ogina, who’s also encouraging her two young girls to learn Inuinnaqtun and use the new apps developed to teach the language.

Throughout the course Ogina said could hear her grandparents’ words in her mind — and “I could understand what they were teaching me.”

The course, taught by Jessie Lyall, introduced students to Inuinnaqtun pronunciation and grammar. The students also worked on acquiring basic skills including:

• using the singular, dual and plural properly like “niriyuuk;” and,

• language for various situations in the home and workplace.

A dialogue in each lesson helped the students see how Inuinnaqtun can be spoken in daily life and developed their listening skills — although many struggled with the concept of the various “chunks” that form the basis of Inuit languages.

Students also worked on their reading and writing in Roman orthography.

And they sometimes played games to help make language learning more fun — these games included matching colours up with their Inuinnaqtun names or finding the Inuinnaqtun numbers to go with the numbers rolled on dice.

The course’s students included several Inuit, who were either relearning or improving their knowledge of Inuinnaqtun in this community of 1,700, where two years ago, only 77 people spoke the language.

All participants in the course passed the exam although they haven’t yet received any certificates to frame.

“But I don’t need a piece of paper to validate what I learned,” said Kituna pharmacy technician Angela Gerbrandt, who arrived in Cambridge Bay in January 2014.

Few clients to the pharmacy have any problems with English, she said.

Gerbrandt, who speaks several other languages, said she wanted to learn Inuinnaqtun “as a sign of respect” and because she wants to be part of the drive to revive the language.

Next month from Nov. 3 to Nov. 14, the graduates from of the first course will be able to take the Ablurvik intermediate course, the “next steps” course, to build more complex language skills.

During this course, teachers Jessie Lyall and Tamalik McGrath will help students learn to:

• talk about events in the past and future;

• learn how to express possession and the location of objects.

Students will also be introduced to the syllabic writing system, but will focus on working on writing assignments in qaliujaaqpait (Roman orthography).

The language courses, offered first to Government of Nunavut workers, are also open to others in the community.

But the problem, according to a graduate of the two Inuinnaqtun courses, is that there are still too few opportunities to use Inuinnaqtun in the community, although with these courses, you may qualify for a $1,500 annual bilingual bonus.